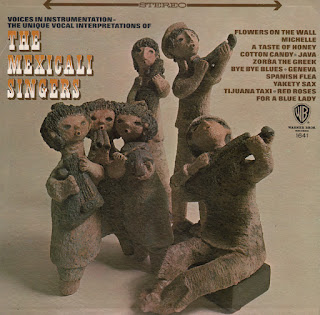 From Billboard - April 9, 1966: Three girls and three guys from South of the Border have formed one of the most exciting vocal groups to hit the record scene in some time. They sing in the Anita Kerr manner - no words, just sounds. And what sounds. Selections are standards.

Interesting light pop project that appears to be marketed, from the cover art and back cover copy, as some sort of "folk/pop" album that might appeal to buyers that were looking for "Mexicali or Tijuana Brass" styled albums. However, the set is light on the "Mexicali and heavy on Anita Kerr Singers light pop vocal treatments.

Mexicali group member "bios" included on the back cover are humorous concoctions which seem to have fooled the Billboard reviewer. This is all Anita Kerr and her group of vocalists.

Great set that features a cover of The Beatles tune Michelle as the standout track.