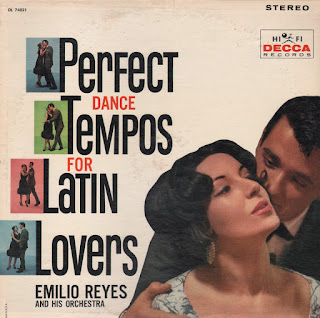 From Billboard - November 7, 1960: Listenable and danceable Latin effort by Emilio Reyes and his orchestra make this a good disk for dance fans. The tunes range from cha cha to mambos and meringues, played in authentic style by the band.

From the back cover: Born in a small Cuban village of Corral Falso (paid tribute to in the chorus of Cha Cha Cha Guajiro), Emilio Reyes almost deprived the world of his music by becoming a dentist, his father's profession. However, through the urgings of one brother, and the aid of another (the latter relieving Emilio of a moral obligation by becoming a dentist himself), he became a musician. After spending two years with his brother's band, the Casino De La Playa, as trumpet soloist and vocalist, he began playing for all the leading bands in Havana. Ultimately, he organized his own group, playing at such popular Havana night spots as the Zombi Club.

A theatrical agent, vacationing in Havana, heard Emilio and convinced him to bring his orchestra to the United States. Due to various immigration complications, Emilio lost his entire group enroute, and arrived in the States alone. Undaunted, he organized a new orchestra in time to accept an engagement at Bill Miller's celebrated Riviera, and has since become one of the most important names in the night club and resort circuits throughout the country. He has also appeared on television, and his recordings rank among the most popular with dancers ranging from beginners who have yet to discover there are right and left feet, to the most expert professionals.