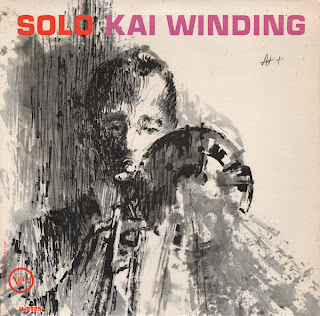 Cover illustration by the up and coming Leroy Neiman. Produced by the inventive Creed Taylor.

From the back cover: Solo serves to re-introduce Kai Winding in an old role – that of an improvising jazzman. It is a departure in that this is the first time Winding has recorded without other front-line horns. He is out there alone, though his excursions are not as extended as those taken at New York's Playboy Club, where he is musical director and "wails" with his group from early in the evening until early in the dawning six evenings a week.

How Are Things In Glocca Morra
Recardo
Playboy's Theme
The Things We Did Last Summer
The Sweetest Sounds
Hey There
I'm Your Bunny Bossa Nova
Days Of Wine And Roses
You've Changed
I Believe In You
Capricious
Posted by By Mark Betcher at 8:12 AM