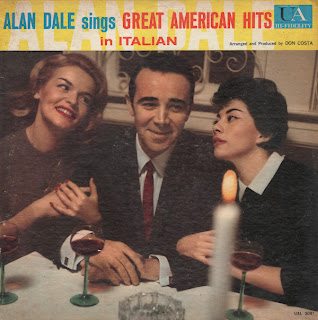 Here's an album (white label promotion copy) I purchased for the fun "snapshot" cover art. Basically, this is what I call the artist photographed in a "natural" setting, rather than a studio set. I didn't think I would warm up to the music, expecting a more "traditional" approach. However, much to my surprise, Costa's light pop arrangements and Dale's super silky smooth vocals work together to create an unique and inviting period lounge sound.

From the back cover: This album means a great deal to me. Singing in Italian brings back fond memories of the days when I sang with my father in what is known in the East as the "Italian Theatre". My dad, Aristide Sigismondo, was one of the foremost Italian comedians. From the age of nine, until I was fourteen, I sang and acted, in Italian, in many of his shows – on stage and radio. Consequently, I learned to speak, read and write Italian fluently. For many years now, I have wanted to record an album such as this... the great American standards sung with beautiful Italian lyrics and a modern American background – strictly for listening. May I thank Don Costa for having faith in the idea and for his fine arrangements and supervision of the entire date. My parents and I are delighted with the album.

It appears that Dale may have cut his career short by refusing an offer from The Mob which resulted in him being attacked in a night club. He also wrote a "tell-all" book, The Spider And The Marionettes - 1965 in which he ranted on a bit too much for some important folks.

Laura
Paradise
I Surrender Dear
At Last
Over The Rainbow
Don't Blame Me
Stardust
I'm In The Mood For Love
I'm Thru With Love
If I Give My Heart To You
Blue Moon
Cherry Pink And Apple Blossom White
Posted by By Mark Betcher at 9:33 AM