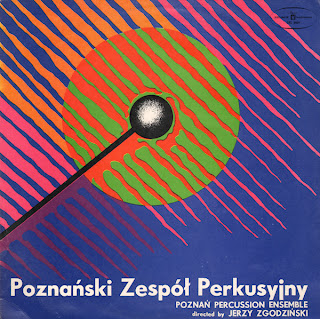 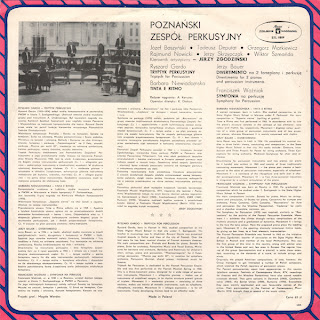 
Polish avant grade percussion album made in the mid-70s. Jacket notes are also printed in English.

From the back cover: Originally they played American compositions. In time, however, the Group managed to get interested a number of Polish composers, which widened the Polish repertory of percussion pieces. The Pozan percussionists, apart from appearances in this country (platform concerts, Festivals of Contemporary Music, RTV, recordings for theaters and the Wroclow Pantomine) have also scored notable successes aboard. They gave concerts in Demark (1965), Czechoslovakia (1967), Rumania (1970). Everywhere they were warmly applauded and won favourable notices of the critics. Their participation in the Festival Of Contemporary Music (Berlin 1973) brought them a reward of the music critics.
Posted by By Mark Betcher at 9:18 AM