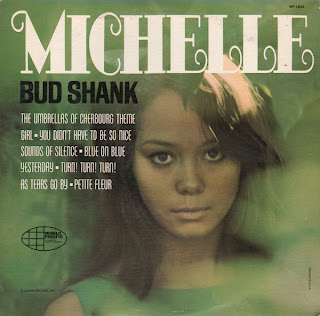 From Billboard July 2, 1966: During this first year under the direction and influence of the pop music independent, one of Bock's two labels, World Pacific has gained a stronger identity. The advantages as Bock sees them now of Liberty ownership are that Bub Shank was re-established as a leading saxophonist resulting from his peppery playing on several pop tunes; trumpeter Chet Baker gained national awareness for his playing with Shank on Michelle and for his Mariachi Brass albums.
Posted by By Mark Betcher at 6:21 AM