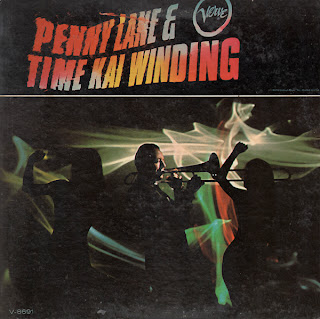 Here's another fine light pop album by Kai Winding. Winding creates a smooth and groovy 60s vibe that manages to capture the essence of a number of Beatles tunes.

From the cover notes: The same thing is being said by Pinter and Ionesco and Tennessee Williams and Leroi Jones, and Edward Albee, and William Burroughs: a terrifying concert attesting to the lack of communication. Well world, I for one disagree. Is that an act of arrogance? Certainly seems a sin, somehow to disagree. World, I don't think they are listening. And, if they are, then they aren't hearing. I mean, is it possible that they haven't heard the "new" music? Music critic Ralph Gleason recently wrote of this current generation taking the creation of today's music and lyrics out of the hands of the hacks and giving it over to the poets. To Lennon and McCartney (who unfortunately, at times feel compelled to sing what they write). To John B. Sebastian. To Bob Dylan and Phil Ochs. To Antonio Carlos Jobim. To Kai Winding. Penny Lane and Time is a culmination of ideas. New ideas. Its vitality reaches out.

This LP will hold your interest all the way through, including The Battle Hymn Of The Republic!

Penny Lane
A Man And A Woman
Here, There & Everywhere
Amor Em Paz
Eleanor Rigby
Lugar Bonito
A Time For Love
Amy's Theme
Mini-Skirt
Battle Hymn Of The Republic
Posted by By Mark Betcher at 7:28 AM