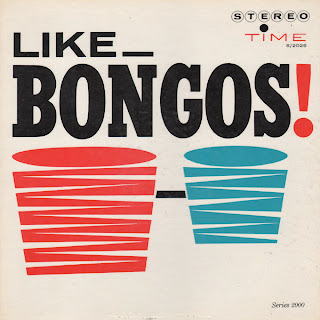 From the inside cover: The group is led jointly by Bob Rosengarden and Phil Kraus, both of whom are among the top free-lance percussionists in New York. During a nine-year stretch on the National Broadcasting Company staff, Rosengarden was seen regularly on the Steve Allen and Ernie Kovacs shows among many others. He does most of the solo bongo work in this set. Kraus, who also served a long apprenticeship in radio and television before going out on his own, plays all the instruments involving mallets – vibes, marimba and xylophone as well as bongos. Handling other percussive sounds are Johnny Pacheco, who specializes in both bongo and conga and Steve Berrios, an expert in all types of Latin American drumming who concentrates on timbales in these numbers. Another essential member with remarkable rapidity from oboe to flute to piccolo to alto and baritone sax.