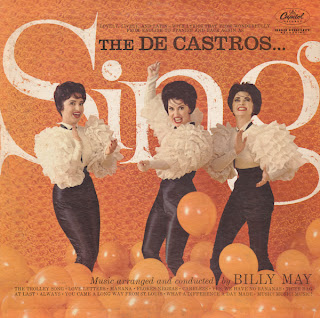 What a great album cover!

From the back cover: Babette, Cherie and Olga have come a long way since they were born in Havana, Cuba, New York City, and Chihuahua, Mexico, respectively. The De Castros did most of their growing up in Havana, where Papa De Castro owned a sugar plantation. When they broke into show business, but good, at New York's Copacabana, the Sahara in Las Vegas, the Cocoanut Grove in Los Angeles, and other leading nighteries across the U.S., they wisely remembered to hang on to their Latin-American heritage.


From Billboard July 11, 1960: The De Castro Sister's first Capitol LP is a strong deejay programming package. The girls are in exuberant vocal form and Billy May supplies exciting swinging backing. The Sisters sing both in English and Spanish on a group of standards; while May interprets them with dynamic effect, aided by bongos, maracas and marimbas.

The Trolly Song
Love Letters
Mañana
Flores Negras
Careless
Yes, We Have No Bananas
Tiger Rag
At Last
Always
You Came A Long Way From St. Louis
What A Difference A Day Makes
Music! Music! Music!
Posted by By Mark Betcher at 6:21 PM