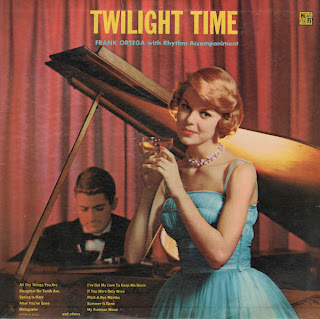 This is a good album by an obscure artist who may or may not be pictured on the cover.

Apparently Ortega was struggling if you can read between the lines from copy found on the back cover: Frank Ortega has up till the present, centered most of his musical activity in the West Coast, playing the night club and supper club circuit and winning great praise for his efforts. But a talent such as his cannot be restricted for long. Within a short period of time, Ortega will receive the national acclaim he so richly deserves and his name will be ranked with those few immortals whose musical stylings have captured the imagination of the music loving public.

This is a lounge piano album fill out with some nice space age percussion. Check out 77 Sunset Strip, which may be another (Frankie) Ortega album.
Posted by By Mark Betcher at 3:23 PM