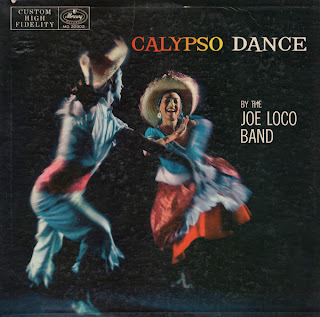 Here we have an outstanding late 50s Latin/jazz/pop album featuring a creative and fresh sound.

Digital purchase/downloads are available so I won't be posting a sample. Sorry!

Loco's wiki page information is a little thin, so I thought that I add the copy from the back cover of this album.

Master of Latin rhythm, or in other words, Joe Loco, has been chief exponent of all things Latin since his dazzling debut in 1946. Loco motion it has been very aptly called. Whether cha cha... menengue or mambo, Mister Loco has brought his perceptive and unique style to this exotic music so a truer and clearer appreciation of this type of music was brought into the American home. How Joe is on a new kick but being Mister Loco it's a kick with a difference. With the same understanding and tenderness that he has treated the Latin American rhythms he now brings his musical magic to work on the Calypso.

Joe Loco was born in New York City in the early twenties. What he knows about bathtub gin, the Charleston, Flappers, or Texas gunmen we don't know. But we do know that at eight years of age Mister Loco, through the courtesy of Mrs. Loco, his mother, was given lessons on the violin and in the dance. He cheerfully gave the violin back to Heifitz after enough lessons persuaded him his talent at that time was in his feet. At thirteen he went on an extended vaudeville tour hoofing up there along with the best of them. After several years of studying musical orchestration, arrangements and learning to be better than good at the piano and trombone he began playing with and arranging for Cugat, Will Bradley, Madriguero and others.

After a stint in the Army Air Force, during the second world war, Joe returned but with a difference, he was on his own and he had a mission. He wanted to popularize in his own country the lush and fascinating Latin rhythms that had so intrigued him. He was sure his fellow Americans would feel the way he did about them. How well he succeeded is now musical history.
Posted by By Mark Betcher at 5:20 PM