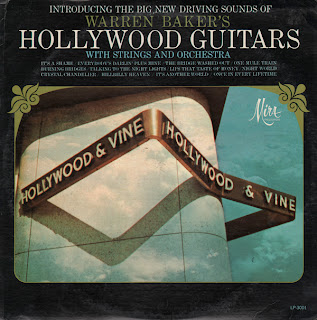 This was the second release for the short-lived Mira label. The recording is available for purchase/digital download so I will not be posting a sample. With the download however, you don't get the original cover and for some reason, Hollywood Guitars becomes a secondary title.

The music is a great blend of orchestrated easy listening and groovy 60s light pop.

Apparently (if this is the same Baker) Baker is best known for composing incidental music for the hit 1960s TV series, Bewitched as well as the theme for The Flying Nun. He also wrote the second season theme for Lost In Space (1966), but it was rejected.
Posted by By Mark Betcher at 3:37 PM