Rhythms Of The South - Edmundo Ros 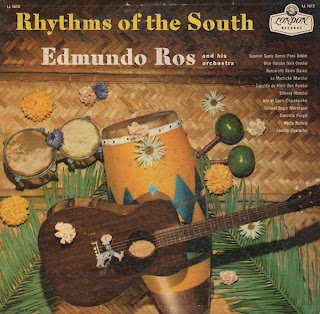 From the back cover: It is now twenty years since a completely unknown young man arrived in London from Venezuela to study harmony, composition and orchestration at the Royal Academy of Music. In 1937 few people anticipated what the future held or its significance, and the young music student from South America certainly had no inkling that he was to become the undisputed king of Latin American dance music in Europe and many other parts of the world.

Now, in 1957, there is no doubt that Edmundo Ros occupies this unique throne. During the space of twenty arduous, eventful years, he has scaled the heights of his chosen vocation, and today finds him the leader of a world-famous orchestra, the proprietor of a popular West End Club which is Mecca of entertainment for foreign visitors as well as Londoners, and a well-established success in spheres other than show business to boot.

Edmundo Ros was born in Caracas, the capitol of Venezuela, on 7th December, 1910. His mother was Venezuelan, his father Scottish-Canadian, and Edmundo was the eldest in a family of four children. His parents originally intended him to enter the legal profession, but it was eventually decided that he should embark on a Army career. Edmundo entered a military academy to study for this objective, and lost no time in joining the academy's military band as a percussionist to indulge his already keen musical inclinations.

The young embryo officer found that his activities with the academy band afforded as much satisfaction as his military curriculum, and, by the time his training period had expired, Edmundo was determined to make music his career. He secured the post of timpanist with the Venezuelan State Symphony Orchestra, thereby gaining a regular income and considerable opportunity to pursue his musical studies. He joined the Venezuelan Musicians Union, and rose to become a member of its committee.

Prior to his spell at the academy, Edmundo had won a State scholarship without availing himself of its advantage; now he sought and obtained permission to utilize his studies at the Royal Academy of Music, and thus began the road to his present eminence.

In common with most students of every generation, Edmundo soon discovered that the terms of his scholarship grant were insufficient to support him without another source of income. Consequently he joined Don Marino Barreto's pioneer Latin American group, which was seeking to establish authentic tropical rhythm as an integral part of the British entertainment scene. Progress was slow and disappointments numerous at first, but the Barreto band gradually won favor and support, especially after it was booked into the Embassy Club. Edmundo sang and drummed with the group until 1940 when he formed his own band for the first time.

He commenced by emulating the Barreto policy of playing and recording only genuine scores by Latin composers, but he quickly realized the limitations of such rigid authenticity. He evolved his present style of playing familiar and uncomplicated tunes and melodies in various Latin rhythms with a genuine percussion section, and this compromise has paid handsome dividends ever since. His long association with famous West End night-spots advanced the cause of Latin American dance music as well as enhancing the reputation of the clubs and Edmundo and his Orchestra, and also obliged him to conclude his Academy studies through pressure of work. – Negel Hunter

From Billboard - October 31, 1964 (review of London Phase 4 Stereo release - SP 44054): Make no mistake about it... the first Edmundo Ros album for London Records in Phase 4 stereo was no fluke. It sold very well and so will this one, once stereophiles hear that it's available. Great sound, wonderful brilliance and Ros at his best. Deluxe packaging too!