Music For An Arabian Night - Ron Goodwin And His Orchestra 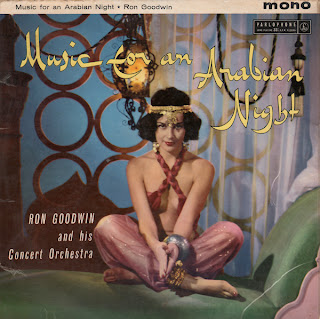 Available from online vendors so I will not be posting a sample. Presented here to share the cover variations and Billboard review.

Ron Goodwin was a prolific soundtrack composer who wrote the scores for films such as Village Of The Damned, Those Magnificent Men In Their Flying Machines and Force 10 From Navarone.

From Billboard - October 10, 1960: Here are some sophisticated arrangements of Eastern melodies. Music for you Turkish coffee and water pipe. Quite an engaging package with a touch of novelty. Don't get the idea it is too far out for Western ears. It is cut for the Western audience, but with its inspiration in the land of the houris and flying carpets. 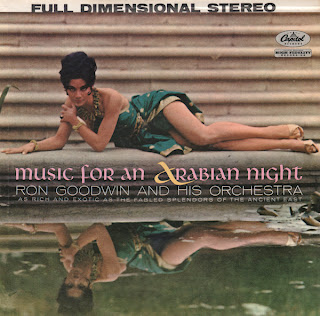 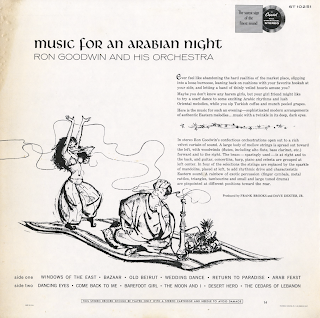 Windows Of The East
Bazarr
Old Beirut
Wedding Dance
Return To Paradise
Arab Feast
Dancing Eyes
Come Back To Me
Barefoot Girl
The Moon And I
Desert Hero
The Cedars Of Lebanon
Posted by By Mark Betcher at 5:07 PM