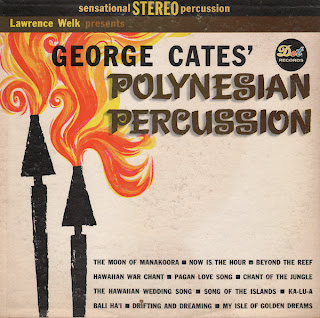 Here's a cool exotica record with Lawrence Welk's name on the cover!

George Cates severed as Welk's musical director in 1951 and conducted the orchestra in rehearsals and did arranging chores for many years. Cates composed Champagne Time, Welk's theme song. In 1973 Welk asked him to conduct the orchestra on camera which he did until the show ended in 1982.

This isn't the first Welk employee to go off the reservation and make a cool pop record. I've found several obscure albums by Dick Kesner that you might like to check out that feature inventive exotica/space age music. Amor Latino and Hawaii.
Posted by By Mark Betcher at 2:48 PM