An Accordion In Paris - Dick Contino 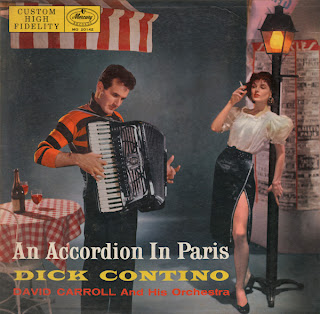 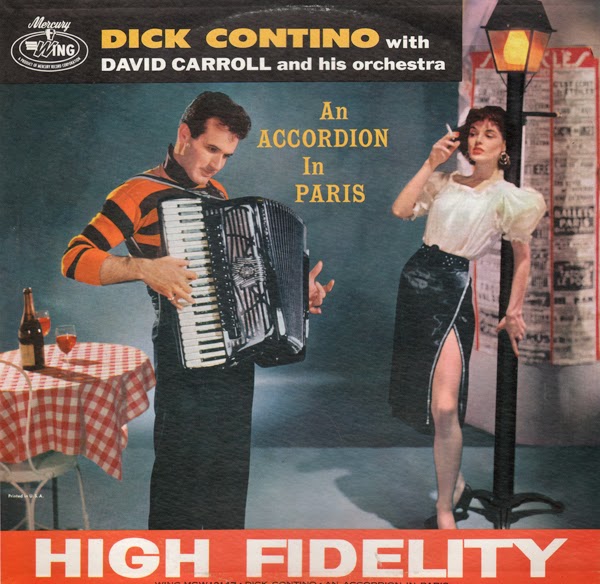 From the back cover: Ever since Dick Contino first appeared on Horace Heidt's famed radio talent hunt several years ago, his constant striving has been towards higher and higher levels of showmanship and musicianship. "The kids like the bellow shake right from the first Heidt show," Dick recalls. "Then I got with the boys in the band and developed new things. We tried a few of these each week, kept the ones the audience liked and ditched those that didn't go."

Fourteen weeks later Dick found himself the owner of an accordion style with public acceptance and the winner of Horace Heidt's quarter finals. He kept seeking new musical potentials of his accordion and Heidt sent him out on the road with a unit of his own.

Suddenly this accordion virtuoso found himself stunned buy success. Over 400 Contino fan clubs across the country drove disc jockey's out of their minds with requests for Dick's recordings. Mailmen grew round-shouldered under his fan mail. Veteran guards at the stage doors of America's leading theaters testified that they had never seen such adulation from fans as that for Dick Contino. To the tune of Lady Of Spain, admiring young females sang "Dickie Contino, we love you," outside the stage doors across America.

Two Loves Have I
Mam'selle
The Petite Waltz
Comme Ci Comme Ca
My Man
The Song From Moulin Rouge
Beyond The Sea
Under The Bridges Of Paris
Blues From An American In Paris
Symphony
Domino
Parlez Moi D'Amour
Posted by By Mark Betcher at 2:58 AM