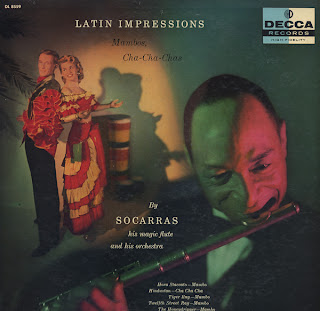 Two blonde Latin Wannabes being lured to dance by the devilish Pied Piper's flute being wielded by the Bela Lugosi-esque Socarras grace the cover.

From his wiki page: In the 1950's Socarras took part in Rod Serling's The Twilight Zone on TV and offered concerts of cult music at the Carnegie Hall in New York.

There is probably no tie in to this cover art and The Twilight Zone or is there?

The music is pretty straight forward Latin made bright by Socarras's Magic Flute. The last tune on the set, Capricho Brujo is a Mambo tune and the only track credit to Socarras. And the song is one of the better tunes on the album.
Posted by By Mark Betcher at 5:32 PM