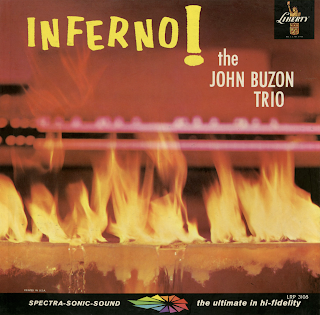 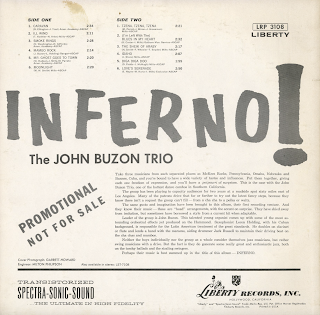 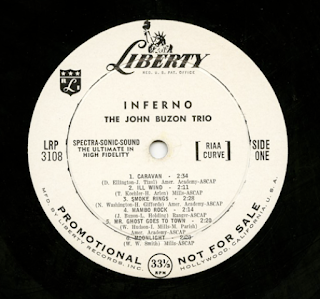 From the back cover: Take three musicians from such separated places as McKees Rocks, Pennsylvania, Omaha, Nebraska and Bannes, Cuba, and you're bound to have a wide variety of tastes and influences. Put them together, giving each one freedom of expression, and you'll have a potpourri of surprises. This is the case with the John Buzon Trio, one of the hottest dance combos in Southern California.

The group has been playing to capacity audiences for two years at a roadside spot sixty miles east of Los Angeles. Many of the patrons drive that far or farther to try out the latest fancy steps, because they know there isn't a request the group can't fill – from a cha cha to a polka or waltz.

The same gusto and imagination have been brought to this album, their first recording venture. And they know their music – these are "head" arrangements, with the accent on surprise. They have shied away from imitation, but sometimes have borrowed a style from a current hit when adaptable.

Leader of the group is John Buzon. This talented young organist comes up with some of the most astounding orchestral effects yet produced on the Hammond. Saxophonist Loren Holding, with his Cuban background, is responsible for the Latin America treatment of the great standards. He doubles on clarinet or flute and lends a hand with maracas, aiding drummer Jack Russel to maintain their driving beat on the cha chas and mambos.

Neither the boys individually nor the group as a whole consider themselves jazz musicians, but rather swing musicians with a drive. But the fact is they do generate some really great and enthusiastic jazz, both on the torch ballads and the sizzling swingers.

From Billboard - April 27, 1959: As the title implies, this is not the coolest jazz LP. The group is the "cocktail lounge" small combo type. They're at their best when they play it straight, as in "Smoke Rings" and drop the tricky organ effects. These, however, have interest in stereo with glissando passages that seem to run across the room from one speaker to the other. The stereo separation is artificial with the organ on the right, sax on the left and drums square in the center.

Caravan
Ill Wind
Smoke Rings
Mambo Rocks
Mr. Ghost Goes To Town
Moonlight
Then, Then, Then
(I'm Left With The) Blues In My Heart
The Sheik Of Araby
Idaho
Diga Diga Doo
Love's Serenade
Posted by By Mark Betcher at 4:19 PM