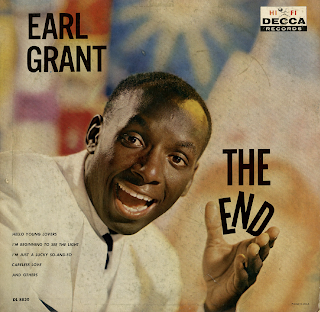 From the back cover: Just this once, and for a very good reason, let's begin at the end. The End in this case being the fabulous new hit record by Early Grant.

With the same outstanding vocal style and virtuoso-touch at the organ, Earl Grant delivers a Hi-Fi album filled with great melodies such as the title song, which is sweeping the country; the Rodgers-Hammerstein favorites Hello, Young Lovers and We Kiss In A Shadow; the engaging Push De Button, from the current Broadway hit musical "Jamaica"; the extremely popular Italian import Volare; and many others.

Earl is ably assisted on all the rhythm numbers by Eddie Hunton on drums and Fred Clark on alto and tenor sax. The guitar work is divided between Al Hendrickson and Al Viola. The bass work is split between Joe Comfort and Wilfred Middlebrooks, and the conga drums is by Ukano.

Earl Grant, a native of Kansas City, is a remarkably versatile young man. This point is well illustrated in his preceding albums, "The Versatile Earl Grant" DL 8672, in which he sings, and, with equal skill and authority, alternately accompanies himself on the organ and the piano.

Intending originally to teach, Earl studied music at The New Rochelle Conservatory in New York, De Paul University in Chicago, and The University of Southern California. While working on his thesis, however, he entertained at clubs in the Los Angeles area, and proved to be an immediate hit. Although still interested in teaching, his every-growing audience won't let him off the stage long enough to try it.

(At) The End (Of The Rainbow)
Hello, Young Lovers
Push De Button
Volare (Nei Blu, Dipinto Di Blu)
I Feel It Right Here
I'm Beginning To See The Light
I'm Just A Lucky So And So
Alright, Okay You Win
We Kiss In A Shadow
Jamaica Farewell Song
Come By Sunday
Careless Love
Posted by By Mark Betcher at 5:45 PM