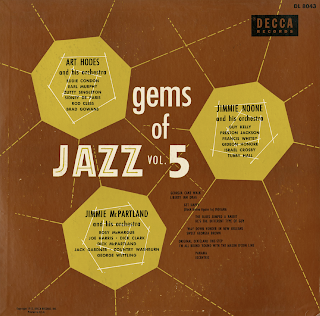 From the back cover: Art Hodes has yet to receive the rightful acclaim due a pianist of his calibre. The famous Original Wolverines, Wingy Manone, and the Chicagoans, are only a few of the historical jazz groups with which he has been associated. Art has always been recognized, among those "in the know," as the greatest white exponent of genuine blues piano. It is only recently that the public has a been clamoring for his work. A great deal of his time, in those early Chicago days, was spent in absorbing the music of Jimmy Yancey, Pine Top Smith, Albert Ammons and Meade Louis, and the great Bessie Smith. It is no wonder that the blues pours out of this man's soul.

From the back cover: Jimmie Noone was one of the greatest of the New Orleans clarinetists. And nothing comes finer than a New Orleans clarinet player as it should be, by a man from New Orleans. His tone and technique alone were the envy of musicians the world over. Add to this, a never ending fountain of original music expression, in perfect taste, and you realize why the name Noone is a style in itself. Noone's first big job was with Freddie Keppard's name of 1913, down in New Orleans. He later achieved fame, with a group of his own, in 1926, at the old Apex Club in Chicago. Noone records of this period with Earl Hines on piano, and Joe Poston on saxophone, are among the most treasured of all collector's items. Noone's recent death in California was a great loss to all lovers of the blues.

From the back cover: Jimmy McPartland's stimulating trumpet need no introduction to jazz enthusiasts. He was the only man with ability and feel enough to replace Bix Beiderbecke in the original Wolverines orchestra. After the Wolverines he joined Ben Pollack's amazing aggregation working with Benny Goodman, Glenn Miller, Ray Bauduc, Jack Teagarden and Charlie Spivak. At the time of this date McPartland was doing club work mostly in Chicago. Except for a sojourn at Nick's in New York, in 1941, Jimmy's natural habitat has always been Chicago.
Posted by By Mark Betcher at 9:04 PM