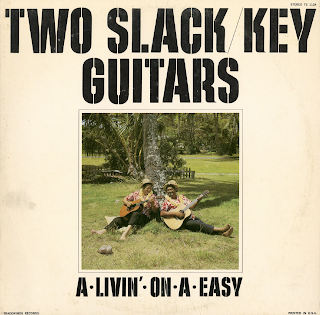 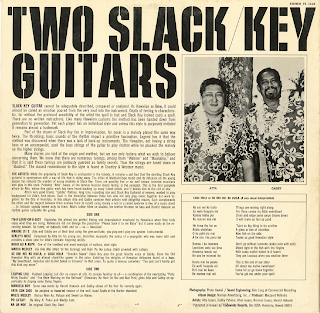 From the back cover: Slack Key Guitar cannot be adequately described, compared or analyzed. As Hawaiian as lime, it could almost be called an emotion poured from the very soul into the instrument. Depth of feeling is characteristic, for without the profound sensibility of the artist the spell is lost and Slack Key indeed casts a spell. There are no written instructions. Like many Hawaiian customs the method has been handed down from generation to generation. Yet each player has an individual style and unless this style is purposely imitated it remains almost a trademark.

Part of the charm of Slack Key lies in improvisation, for never is a melody played the same way twice. The throbbing, basic sound of the rhythm impart a primitive fascination. Legend has it that the method was discovered when there was a lack of back-up instruments. The Hawaiian, not having a string bass or an accompanist, used the bass strings of the guitar to play rhythm while he plucked the melody on the higher strings.

Many stories are told of the origin and method, but we can only believe what we wish to believe concerning them. We know that there are numerous tunings, among them "Wahine" and "Maunaloa," and that it is said these tunings are jealousy guarded family secrets. Thus the strings are tuned down or "slacked." The closest resemblance to the style is found in Country & Western music.

The Artist: While the popularity of Slack Key is undisputed in the Islands, it remains a sad fact that the strolling Slack Key guitarist is synonymous with a way of life that is dying away. The influx of Mainland-type music, and its influence on the young people has reduced the number of young students of Slack Key. There are possibly five or six well known, talented musicians who play in this style. Probably "Atta" Isaacs, of the famous musical Isaacs family, is the youngest. This is the first complete album by Atta, whose fine guitar work has been heard backing up many Island artists, and it boost him to the roll of star.

Atta's very good friend, "Gabby" Pahinui, long time recording star and Slack Key Guitarist of renown, wanted to play background for Atta's first album. Such is the friendship between these two who not only play music together but work together for the City of Honolulu. In this album Atta and Gabby combine their artistry with delightful results. Each complements the other and the rapport between them enables them to record using merely a nod or a raised eyebrow in lieu of a music sheet... to indicate signals known only to them. Atta's father Alvin on ukulele, his brother Norman on bass and Harold Hakuole on rhythm guitar complete the group.