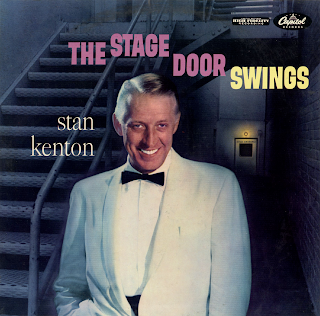 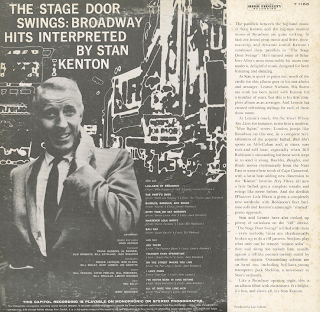 From the back cover: As Stan is quick to point out, much of the credit for this album goes to his star altoist and arranger Lennie Nichaus. His fluent sax work has been heard with Kenton for a number of years, but this is his first complete album as an arranger. And Lennie has created refreshing stylings for each of these show tunes.

At Lennie's touch, On The Street Where You Live, for instance, turns into a modern, "blue lights" street; London jumps like Broadway on this one, in a complete revitalization of the popular ballad. Bali Ha'i sports an Afro-Cuban and, at times, easy rock-and-roll beat, especially when Bill Robinson's outstanding baritone work steps in to send it along. Baubles, Bangles, And Beads moves rhythmically from the Near East to somewhere south of Cape Canaveral, with a latin beat adding new dimension to the "Kismet" favorite. Hey There, till now a lyric ballad, gets a complete remake and swings like never before. And the devilish Whatever Lola Wants is given a completely new wardrobe with Robinson's fleet baritone solo and Kenton's amusingly "slurred" paint approach.

Stan and Lennie have also cooked up plenty of variations on the "riff" device. "The Stage Door Swings" is filled with them – even melodic lines are rhythmically broken up to fit a riff pattern. Sections play what only can be termed "unison solos" – they wail along the melody line, usually against a riff-like counter melody stated by another section. Outstanding soloist are on hand too, including brilliant young trumpeter Jack Sheldon, a newcomer to Stan's orchestra.

From Billboard - April 13, 1959: Kenton turns to a group of well-known show tunes for his latest LP. Set if filled with the orkster's imaginative treatments - all of which are ideal in stereo. The rhythmic and melodic variations show imagination and taste. Tunes include "Younger Than Springtime," "Whatever Lola Wants" and "I've Never Been In Love Before."

Lullabye Of Broadway
The Party's Over
Baubles, Bangles, And Beads
Ev'ry Time We Say Goodbye
Whatever Lola Wants
Bali Ha'i
Hey There
Younger Than Springtime
On The Street Where You Live
I Love Paris
I've Never Benn In Love Before
All At Once You Love Her
Posted by By Mark Betcher at 5:53 PM