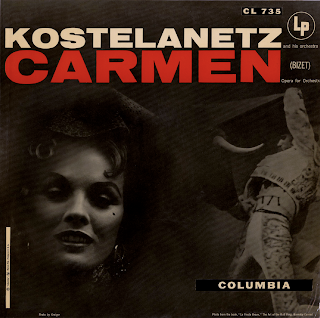 From the back cover: Facts About This Record

George Bizet: Born in Paris, October 25, 1838; died Bougival, June 3, 1875. Studied with Halevy, whose daughter he later married, and who, with Meihac, adapted the libretto of Carmen from the short novel by Prosper Merimee.

Carmen was produced at the Opera-comique in Paris in 1875. After fifty performances it was dropped from the company's repertoire until 1883 when it was restored and given ovation in virtually every country in Europe. By 1903 Carmen had been given more than one thousand times in Paris alone, and except for the work of Wagner, is the most popular opera on the European stage. Bizet, however, died, just three months after the production of the opera and never knew that he had created such a widely accepted masterpiece.

Acts I through IV
Posted by By Mark Betcher at 4:44 PM