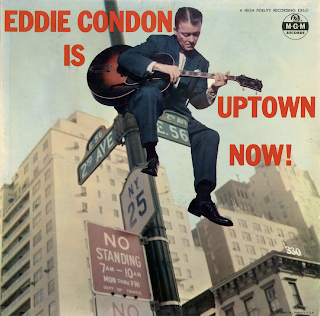 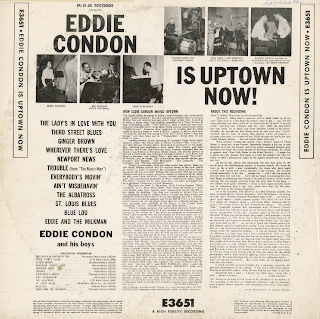 From the back cover: The legend of the founding of Eddie Condon's night club, mysteriously called "Eddie Condon's", has been told almost as many times as Leonard Feather has told recently how jazz didn't come up the river. According to some, it began when Tim Costello, proprietor of a Third Avenue El stop mysteriously called "Tim Costello's", gave a party for the publication of John McNulty's book about Third mysteriously called "Third Avenue". Someone there suggested to Condon that he either ought to found a book or write a saloon. Condon is said to have said, "I knew the whiskey was strong in here, but I didn't know it was that strong." and then went out to "Twenty-One," where they let you drink in peace.

Another version of the founding of Condon's Third Street establishment credits the whole idea to Elaine Lorillard (Miss Louis P.), Mrs. Lorillard had published a book about Tom Costello and John McNulty, and at the publishing-day party someone suggested that she found a jazz festival at Newport, Rhode Island. She decided instead to start on a small scale, and thereupon founded Condon's Lord Action was hired as doorman, and George Wein (who later founded "Storyville" in Boston) was in charge. This combination later moved uptown and founded "The Ember," "The Metropole," "The Composer," "The Arranger" and "The Iron Chancellor."

History is beclouded: there are other myths that persist. Some say that Buddy Bolden himself was the original owner of the club, which he started in order to preserve his anonymity; others say Benny Goodman did it as tax relief. Perhaps the only person who has not been linked to the club by rumor, gossip or calumny is Lawrence Welk. Well, we may never know the truth. Condon himself refuses to discuss it in print (his monumental biography of Mezz, mysteriously called "Really The Mezz," occupies all his time these days, and when he finishes that he is planning a biography of Bull Montana.

The facts are these. In December, 1945, Condon opened "Eddie Condon's" at 47 West Third Street, New York; he closed it a little over twelve years later. The club was doomed to success from the very beginning. Condon's friends all said it would last three weeks, and optimistic relatives were sure it would get through the 1945 holidays. It survived a murderous summer and, by the fall of 1946, it was beginning to move over into the black. From then on, it became perhaps the most successful jazz nightclub in the history of the United States (excluding "Nick's," Seventh Avenue and Tenth Street).

The personnel of the band in the old joint, for the last two years of its existence, consisted of Wild Bill Davidson, cornet; Cutty Cuttshall, trombone; Bob Wilber, clarinet; Gene Schroeder, piano (Gene is the only man who has been with Condon uninterruptedly since he very beginning, a tribute got almost unbelievable patience); George Wettling, drums; Leonard Gaskin, bass and, from time to time, Eddie Condon, scotch. Just before moving day, Wild Bill decided to devote more of his time to collecting antiques and was replaced by Rex Stewart, Some time before that, Bob Wilber went uptown to join Bobby Hackett and was replace by Herb Hall. To this group for this record, Condon has added some of the boys who are more or less regular Condonites: Billy Butterfield, trumpet; Dick Cary, alto turmpet, also horn (Condon calls the alto horn "the slop jar"); and Bud Freeman , tenor (under the provisions of the last Geneva Conference, FREEMAN's name must always be put in capital letters).

In the studio at the time these records were made; but not listed as artists were Mr. Jim Bishop, the eminent biographer of Jesus; Mr. Jack Lazare, the eminent disk jockey; Mr. Eli Waldron, the eminent Kerouac devotee; and Mr. Moe Moesdale, the eminent hangover. A friend from Scotland was present, too, and – in Condon's classic phrase – exhausted when it was all over. Condon's uptown now, dear friends; and so is - Richard Gehman (Mr. Gehman, notable public charge, is a contributing editor of COSMOPOLITAN magazine and indefatigable Eddie Condon chronicler.)

From Billboard - April 28, 1958: Now a very high class cat with an uptown night club, guitarist Condon has rounded up his regular crew, plus a guest roster that includes Bud Freeman, Billy Butterfield and Dick Cary, for some free-swinging Chicago-type sounds. Tunes include originals by band members (like The Albatross) and standards like "St. Louis Blues," Eddie's old-style, straight guitar work provides an unobtrusive but firm rhythm background.

The Lady's In Love With You
Third Street Blues
Ginger Brown
Wherever There's Love
Newport News
Trouble (from "The Music Man")
Everybody's Movin'
Ain't Misbehavin'
The Albatross
St. Louis Blues
Blue Lou
Eddie And The Milkman
Posted by By Mark Betcher at 4:33 PM