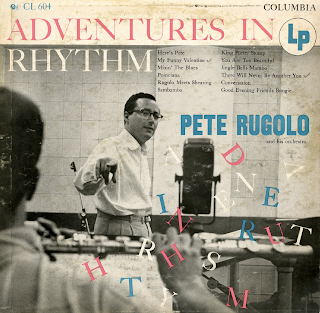 From the back cover: Here's Pete. Pete Rugolo was born December 25, 1916 in Sicily. One of the ablest and most creative arrangers in the business today. Pete wrote for dance orchestras all through his college days and while in the army. He idolized the newly-formed Stan Kenton band and submitted a sample score. A few months later, a wire arrived informing Pete that he was a member of the Kenton arranging staff. Pete was associated with Kenton for five years, after which he was given an assignment at the MGM studios, where he became a part of the fabulous movie industry. He also composed and conducted the musical background for the Bette Davis radio series. Woman Of The Year. Between pictures he wrote vocal backgrounds for Peggy Lee, Mel Trome, Nat Cole, Billy Eckstine, June Christy, Tony Martin and others. Then in November of 1953, preliminary talks were under way with Columbia Records in sign Pete as a band leader. This was an unfulfilled ambition of long standing – to have a band of his own, to arrange and write as he really wanted to. Thanks to Columbia, this has happened. And in this album are twelve excellent reasons for Pete's Columbia contract.

Also from the back cover: Sambamba – From the title you can guess that this one is a samba. The orchestration begins with a rhythm sound reminiscent of the parade grounds, with the whistle and snare drums. The idea behind this arrangement was to show the facility of the trumpet section by giving them the fast-moving strain that is ordinarily played by strings or woodwinds. Solo spots are by Milt Bernhardt (trombone), Harry Klee (alto flute), Lauren Almeida (guitar) and Bud Shank (alto sax). The composition finishes with the trumpets playing the fast-moving theme line. For authenticity, we added timbales and conga drums, to bring the total number of drummers to four.

From Billboard - December 4, 1954: The Pete Rugolo crew, one of the newer cool jazz bands, should gain a lot of new friends with this album. It fractures the modern ork in collection of cleverly arranged standards, with an occasional original thrown in, that show off the arranging talents of the leader and the fine sound of the band. This is not for dancing but it will provide much good listening. Best sides include "My Funny Valentine" and "Poinciana" which show off a warm sound, plus "Rugolo Meets Shearing." Cool cats should dig this ork and this LP.

Here's Pete
My Funny Valentine
Mixin' The Blues
Poinciana
Rugolo Meets Shearing
Sambamba
King Porter Stomp
You Are Too Beautiful
Jingle Bells Mambo
There Will Never Be Another You
Conversation
Good Evening Friends Boogie
Posted by By Mark Betcher at 7:17 PM