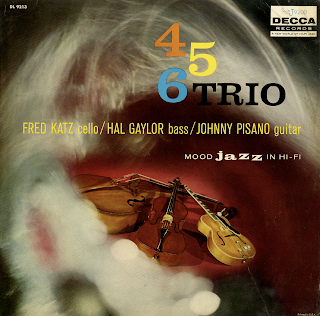 From the back cover: Fred Katz is very clear in his insistence that although others may feel impelled to categorize his work, he himself will not be bound by any definitions but his own. "What I try to create for myself and for the group is music," he told Metronome. "What I'm out to express are ideas and feelings that are beautiful. Criticism that my work is not jazz makes no difference. What is important is that my music should be beautiful and that it should be judged as music, not by an artificial standard of whether it is jazz of not."

Metronome apparently agree with Katz, because in its enthusiastic review of his previous Decca set, Soul Cello (DL 9202), it ended: "First, to us, comes emotion, then creation, then theory, trying to describe and explain. If this is the case, and it is the case with all music of strength and conviction, Fred Katz will have no trouble. For this is the way we feel he grows."

Fred has an unusually diversified background, another reason he feels it natural to range though different kinds of disciplines to create finally what he feels is his own musical speech. Born in Brooklyn, February 25, 1919, he was a scholarship student of cello and piano at the Third Street Music Settlement; played at Town Hall at 13; studied conducting and composition; became musical director of the 7th Army Headquarters overseas; and wrote music for a ballet. in 1945. His works have been played by concert orchestras, including one program by the Heidelberg Symphony and that was devoted entirely to his work.

In the popular field, Fred has been piano accompanist for Lean Horne, Mindy Carson, Tony Bennett and others. He has written for films; taught; and has been commissioned by cello virtuoso Gregor Piatigorsky to write a jazz piece for him. In jazz, he first became widely known with the Chico Hamilton Quintet – for which he also wrote – and has since functioned on several albums as player, writer and occasionally leader.

Fred has the capacity to gain and keep the admiration of musicians with whom he has worked. Paul Horn has called him a "phenomenal musician" and credits Fred with having been the most important influence on him when he was with Chico Hamilton's unit. Fred has been and continues to be a source of encouragement – and instruction – for several young musicians on the coast who, like himself, believe in worrying about categories after the music had been created.

Like Fred, guitarist John Pisano and bassist Hal Gaylor are alumni of the Chico Hamilton Quintet. Pisano was born in Staten Island, New York, some 26 years ago. After high school and guitar studies with Chuck Wayne, he went into the Air Force and became a member of the service band, The Crew Chiefs. After being discharged, he freelanced in New York with several commercial and jazz units, and then replaced Jim Hall with Hamilton.

Taylor, born July, 1929, in Montreal, first played clarinet and saxophone. When he was 20, he picked up his father's bass and it became his primary instrument. He worked with singers and gigged in instrumental combos around Montreal, recording several years ago with the Canadian All-Stars. He worked with Paul Bley, another Canadian jazzmen, before joining Chico Hamilton.

The dominant voice in this unusual set of solos, duos and trios is Fred Katz. To my knowledge, this is the first non-classical album to feature a cellist throughout in this kind of intimate instrumentation and material. There is no place to hide when your only associates are guitar and bass. The challenge for Katz to sustain interest and his own invention over an entire 12" album. In his favor, aside from the multi-faceted background previously described in his remarkable flexibility on his instrument. He has made it so much an extension of himself that he can call on it to wail, literally and figuratively, to play with passionate romanticism; to be witty brisk; and to play a "straight" melody with very personal phrasing along with "legitimate" tone and technique. – Nat Hentoff

From Billboard - December 8, 1958: A unique string trio makes something special out of standards and originals. The three Chico Hamilton alumni are gifted musicians with "Sophisticated Lady," "Perdido" and "Della" standout. Find mood wax.

Four, Five, Six
Sophisticated Lady
Isn't It Romantic
Della
Like Someone In Love
Krelch
Mountain Air
Perdido (Lost)
I'm Getting Sentimental Over You
Posted by By Mark Betcher at 10:28 PM