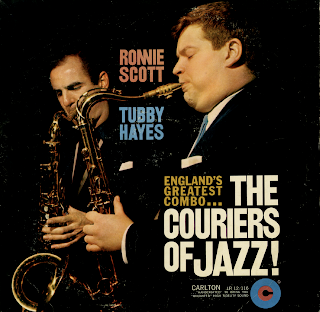 From the back cover: Ronnie Scott, the dark-haired, taciturn co-leader of the group, who would just as soon talk about auto racing as music, has been in the U.S. several times. He brought his own group over once on an exchange deal; on tow other occasions he worked his way across on the big ocean liners to dig jazz in New York – on the Big Apple. On one of his visits Scott even took a bus trip out to California, stopping off on the way to visit his old friend, vibraphonist Victor Feldman, then playing with Woody Herman's band at Lake Tahoe. Scott sat in with the Herman group that summer and was immediately offered a saxophone chair in the Herman band. Scott, however, wanted to return to England and reform his own group.

This, of course, he did and later joined forces with Tubby Hayes, also a tenor man in The Couriers Of Jazz, since the sensation of British jazz – the first British modern jazz group to be voted into top place in the Melody Maker poll.

England's musical taste is apparently changing – at least in jazz. Not too long ago the favorite tribute to the talent of Scott and Hayes that The Couriers Of Jazz were the first to break the ice for modern jazz with a two-tenor combo, by no means an easy unit to work with. There has been but one other such successful two-tenor unit in recents years, that of tenors Al Cohn and Zoot Sims which excited Jazz fans during its brief existence.

The Couriers Of Jazz not only boasts of two of the top solo horn players in Europe in Scott and Hayes, but have the advantages of Hayes' ability to double on vibes, plus a swinging rhythm section. European horn players have long been ahead of their rhythm section team mates in jazz capability. European rhythm men tend to be stiff. Not so The Couriers. They cook along as though Piccidilly Circus was only a block and a half from Birdland or just down the block from Bohemia.

In listening to this album, it is intriguing to watch the ways in which the tenor saxophone playing of Scott and Hayes are similar and the ways in which they are different as they follow one another on the same tune. It is also fascinating, as on "Star Eyes" and "My Funny Valentine."

"The Monk," by the way, is an original composition by Tubby Hayes and a tribute to Thelonious Monk, two of whose favorite sequences are utilized and which recalls his moody presence throughout. Hayes, incidentally, did all the arrangements except "In Salah," Mose Allison's tune which was arranged by bassist Jeff Clyne, and "Stop The World, I Want To Get Off!" written and arranged by Scott. Hayes also contributed the originals, "Mirage," "After Tea" and "The Monk,"

A word about the musicians: Ronnie Scott was born in London, January 28, 1927, switched from soprano to tenor when he was 15 and has played with Ted Heath, Ambrose, Vic Lewis, Jack Parnell and has led several bands of his own. He was one of the early leaders of the modern jazz movement in England, once was one of the organizers of a musicians-manager club. His main influences include Charlie Ventura, Charlie Parker, Stan Getz, Sonny Stitt and Sonny Rollins.

Tubby Hayes was born in London, January 30, 1935, the son of a violinist who started him on that instrument. He switched to tenor when he was 12, began playing in jazz clubs when he was 14. He also played with Ambrose, Vic Lewis, Jack Parnell and Kenny Baker. He doubles on vibes, baritone and flute and his influences include Parker, Stitt, Getz, Rollins and Hank Mobley.

Terry Shannon was born in London, November 5, 1929, began playing piano in 1955 and has been appearing in British jazz clubs ever since. He likes Horace Silver, John Lewis and Tommy Flanagan. Jeff Clyne, born in London on January 29, 1937, has worked with numerous British jazz groups and has visited New York to hear jazz at its source. His influences include Oscar Pettiford, Doug Watkins, Paul Chambers and Ray Brown. Bill Eyden, born in London on May 4, 1930, joined Tubby Hayes band in 1955 after a career as a drummer with several big bands. His favorites are Art Blakey, Philly Joe Jones, Kenny Clarke, Art Taylor and Max Roach. – Ralph J. Gleason

From Billboard - December 21, 1959: Here's an interesting two-tenor combo from England. The first British modern jazz group to be voted into top place in the "Melody Marker" poll, the Scott-Hayes team plays with feeling and taste, in similar yet different styles. Selections include "My Funny Valentine," "Day In, Day Out," and some fascinating originals. Hayes doubles on vibes. Boys are backed by rhythm section.

Mirage
After Tea
Stop The World I Want To Get Off!
In Salah
Star Eyes
The Monk
My Funny Valentine
Day In, Day Out
Posted by By Mark Betcher at 8:09 PM