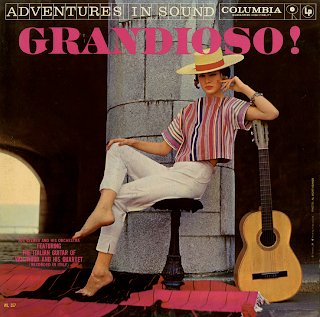 Lazzarella
Grandioso!
Jo Cleber and His Orchestra
Featuring the Italian Guitar of Van Wood and His Quartet
Columbia WL 157

From the back cover: Once upon a time there was a twelve-year old Dutch Boy Scout named Peter van Houten who sat by a camp fire one night and fell head over heels in love – not with the Princess he married in later years – but with an old guitar. Four years later the young Dutchman formed his own trio, sharing the honors with a jazz accordionist who is now his brother-in-law, Matt Matthews.

When the war broke out, and for four years thereafter, the two youngsters spent much of their time experimenting with new chords, modern harmonies and technical tricks. The occupying forces in Holland arrested Peter and Matt and put them in a concentration camp. Undaunted, the boys managed to dress up as old women and to escape on bicycles without tires. Taking refuge in a cellar, they began making wonderful music again.

After the war, young Peter went his own way, playing in the bistros of Paris and on the streets of Madrid. He sang for Radio Luxembourg and for audiences in all parts of North Africa. Slowly but surely his star began to rise. People liked this energetic guitar virtuoso with his mop of black curly hair, the gay twinkle in his eyes, the happy smile and vivacious voice. Night clubs began to offer him better and better contracts

In 1949, Peter reached Naples and was already half-way on the road to international stardom. In almost no time at all, his splendid playing captured the imagination of the Italians and he swiftly achieved the fame he had dreamed of. His interpretations of Italian melodies displayed a special flair for Mediterranean rhythms, and his fine musicianship was welcome by the music-loving citizens. Now that man who once performed for a hot meal lives luxuriously in Milan. On the door, as on the posters all over Italy, you'll find the English version of his Dutch name in shining capitals:

Millions of Van Wood's records have been sold in Italy alone. He has made countless TV appearances and radio broadcasts, and every club he chooses to play is full of happy and delighted listeners. As his name has changed, so has his guitar. Today it is a snow-white electric one, complete with echo chambers and tone pedals and all sorts of knobs for special effects.

Mrs. Van Wood, the former Princess Fatemeh Khatir, first saw the white guitar in Rome at a dance to which she had been escorted by the Persian Consul. Later she confessed that she didn't see the man behind it until several nights and dances later. Protected by the Iranian Embassy, Her Royal Highness did not meet Van Wood again easily. When he came to America in 1951 to play at the Waldorf-Astoria, the Princess persuaded her family of her intern in seeing America and soon thereafter Van and the Princess were married.

"Success is a very strange thing," Van Wood says, "I think the main factor is that you've got to like the thing you're doing. I am really very fond of playing the guitar and singing and making all the arrangements for my quartet. And furthermore, I love meeting lots of people." And lots of people like meeting and hearing Van Wood, too. He is admired by Johnnie Ray and Frankie Laine and once succeeded in getting King Farouk to his feet to applaud him.

Van Wood is one of the merriest musicians and has one of the finest quartets to emerge from the post-war world of entertainment!