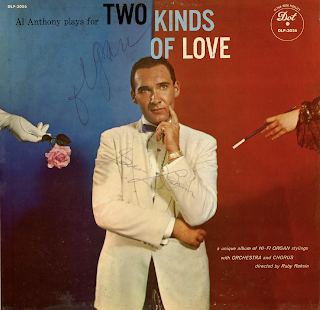 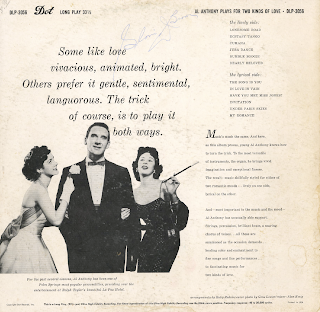 From the back cover: For the past several seasons, Al Anthony has ben one of Palm Springs most popular personalities, presiding over the entertainment at Ralph Taylor's beautiful La Paz Hotel.

From Billboard - July 20, 1959: Columbia Records signed Al Anthony to a contract. His initial release will be a single scheduled for July 20 release singing his own cleffing "My Sister," Anthony was inked by Columbia's Coast Artist-Repertoire exec Alan Emig. Anthony currently has two albums on the market, "Two Kinds Of Love" for Dot and "Swingin' In Hi-Fi" for Liberty.

Lonesome Road
Ecstasy Tango
Cumana
Juba Dance
Bumble Boogie
Dearly Beloved
The Song Is You
In Love In Vain
Have You Met Miss Jones?
Invitation
Under Paris Skies
My Romance
Posted by By Mark Betcher at 5:22 PM