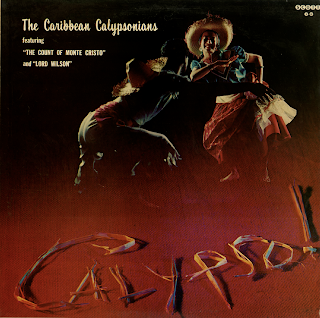 From what I can gather from current online examples, the S-12/13 disc sleeved in this catalog number S-10 jacket was likely sold together. There are a variety of sets sold inside this cover. My post appears to be the first listing of the S-12/13 title list.

From the back cover: The Artists

Each is a master of his instrument and of the ageless tradition of calypso music in the islands. The Sovereign, who plays the clarinet and saxophone, is the leader of the Caribbean Calypsonians. He graduated from the song carnivals of Trinidad, earning the title of Sovereign, and then went to Europe where he toured with extraordinary success throughout England, France, Switzerland, Belgium, Spain and Sweden.

The Count of Monte Cristo, who handles the maracas and most of the vocals, has lived on every island in the Caribbean during the past 25 years. He is an earnest, handsome singer who probably knows more about calypso than any other living person – and he has yet to lost to a challenger.

Frank Anderson, the pianist who gladdens these songs with canny rhythms and modulations, has had an excellent training in Juilliard preparatory studies, and is currently leading his own organ trio in cafe society.

Jospeh Wilson, who shares the major delivery of songs with the Count and strums an electric guitar besides, is among the most recent arrivals in the United States directly from engagements in the hotels of St. Croix and St. Thomas. Charles (Tony) Thomas, the 5-string bass player, has also come to the United States directly from hotel dates in the Caribbean. Both of Tony's parents were African, his mother being from the Congo Tribe, and his father from the Ibo Tribe – a rich, proud heritage indeed.

Juan Montoute, the conga drummer of the sextet, has an irrepressible rhythm that neither his associates nor an audience can resist – and an enormous smile to go with it. He is an expert on such Afro-Caribbean dialects as the Lucumi, Kimbisa and Alacua, and the talkie-talk patois of Surenam and Cuba. His theses, at C.C.N.Y. and St. Lawrence University were on the subject of the African influence in the Caribbean.