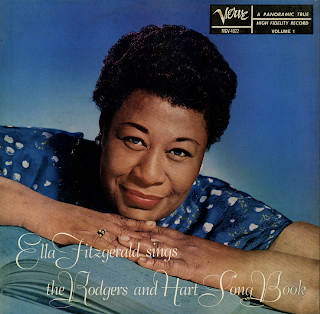 Dancing On The Ceiling 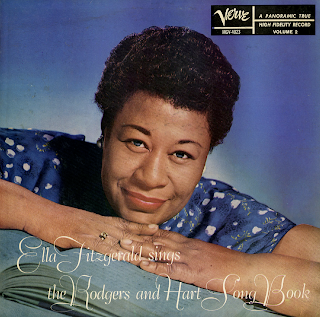 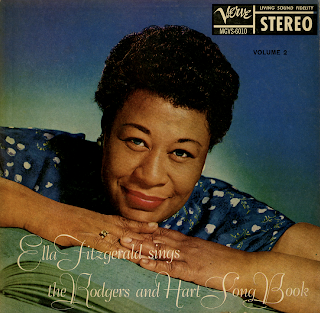 From The back cover: About The Arrangements

Most arrangers stamp their own identity in what they write, whatever the tune may be, and it is rare that the true spirit of not only the melody but the lyric is captured. Primarily they complement the vocalist and let it go at that. In this album the rare exception transpires: Buddy Bregman accurately captures not only the soaring Rodgers melodies and the very special Hart Lyrics, but the magic of Ella Fitzgerald's interpretations. – Norman Granz, Producer of the Rodgers and Hart Song Book

From the back cover (Vol. 1): Ella's first recording was made in 1935, shortly after her first appearance as vocalist with Chick Webb's band. Thereafter she appeared on at least one side of almost every record Webb made until his death in 1939. Her output on disks was supported almost exclusively by the jazz cult until mid-1938, when she herself put together a swing versos of an old nursery jingle and came up with a million-seller entitled "A Ticket A Tasket."

To the dismay of the jazz people, and perhaps Ella also, this became her trade mark. The record company tried time and time to come up with another success in the same vein.

Her next sizable seller came seven years later. It was her duet with Louis Jordan – the calypso comic bit, "Stone Cold Dead In The Market." Ella with her marvelous ear and equally marvelous timing turned this into a dialectal delight. It was nearly two years later, in '47, that she came up with another blockbuster. After a series of "cover" ides (recordings of tunes that had become hits originally via other artists on other labels) Ella asked for and got her own way for just one spare piece of acetate. It turned out to be her hit recording of "Lady Be Good."

Bop was the big thing with musicians that year and there was an epidemic of scat singing that identified itself superficially with the new music. "Hey Bob A Re Bob" and such were the anthems, but Ella managed to put all of that nonsense in its proper perspective when "Lady" was release. She had invented her own scat language, and she reeled off chorus after chorus that a put to shame many of the best improvising instrumentalists.

She followed up with "Flying Home' and "How High The Moon" and then began another succession of covers, revivals and mediocrities, none of which seemed designed to hit a very large public.

Finally, in 1956, she changed her record affiliation and it took just one album to prove that there existed a large audience of the things Ella does best, the things she likes best to do... meaning, of course, the better songs. We're referring to the monumental "Cole Porter Song Book," which is one of the outstanding examples of popular vocal art. – William Simon, Music Critic
Vol. 1

Vol. 2 (there are numerous errors present on the jacket track list - the following list is from the disc label)