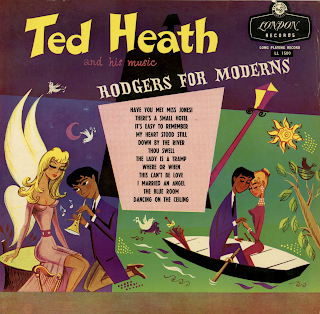 From the back cover: This stylish tribute in modern mood is made by Ted Heath and his Music, acknowledged as one of the greatest of modern swing bands on both sides of the Atlantic. For a British band to invade the home of swing and to be accepted as one of the best is a very unusual triumph indeed. The Ted Heath story is all that a success story should be. He was born in Wandsworth, a not very exciting part of South-West London, full of large and shabby Victorian houses and little else, and here, at the age of twelve, he began to learn to play the trombone. At the end of the first World War he found himself, as so many young men did, amongst the numerous ranks of unemployed, so he took his trombone and ranks of unemployed, so he took his trombone and busked in the streets. In 1920 he got a job with Jack Hylton's orchestra, moving from there to play with many of the best British bands, including those of Ambrose and Sidney Lipton, until he joined Geraldo as first trombone in 1940. At this time he composed two songs which had quite a success, and the royalties from these allowed him to fulfill a lifelong ambition and to form his own band. This quickly became one of the most talked-of bands in the country, selling a fabulous number of records, introducing singers like Dickie Valentine and Lita Rosa, and starting the popular Sunday Swing Sessions which drew capacity crowds to the London Palladium for many years.

From Billboard - November 3, 1956: One of the crispest big bands in the business, with some of the sharpest and cleanest ensemble work to be heard, is at its classiest best on a brace of a dozen memorable Rodgers and Hart songs. The material is almost all styled for dancing but the interesting arrangements, plus great solo work, is likely to take the listening fancy as well. Tunes include "Have You Met Miss Jones," "Thou Swell," "The Lady Is A Tramp," and others equally appealing. A solid counter item.

Have You Met Miss Jones?
There's A Small Hotel
It's Easy To Remember
My Heart Stood Still
Down By The River
Thou Swell
The Lady Is A Tramp
Where Or When
This Can't Be Love
I Married An Angel
The Blue Room
Down By The River
Posted by By Mark Betcher at 6:40 PM