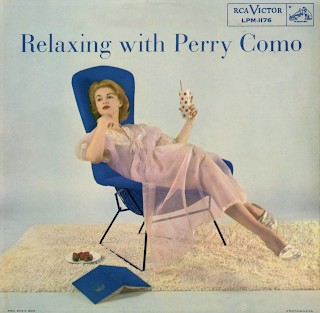 Available from online vendors so I will not be posting a sample. Presented here to share the originals cover art and jacket notes excerpt.

From the back cover: Pierino Ronald Como was born in Canonsburg, Pennsylvania. Although he always like to sing, his first great ambition was to be the best darned barber in all Canonsburg. After graduation from high school, he opened his own tonsorial establishment that featured the special Como hair cuts plus some mighty pleasing Como singing in the background. In 1933 Perry joined Freddy Carlone's band in Ohio and three years later moved on up to Ted Weem's Orchestra and his first record dates.

In 1942 Weeks dissolved his band and Perry went on to CBS where he sang for a couple of years without any conspicuous success. By this time the erstwhile barber had definitely decided to return to Canonsburg, his family and his barbering. Just as Perry was about to abandon his singing career once and for all, Fate in the person of two NBC producers felicitously stepped in and wheeled him back into show business – specifically for the NBC "Supper Club," followed by very successful theater and night club engagements.

Came 1945 and Como's practically perfect reading of the Buddy Kaye-Ted Mossman pop ballad, Till the End of Time (based of course on Chopin's Polonaise), and the rest is not only recording but also TV history; Perry is the only artist who has ever had ten records to over the magic million-copies mark (including, incidentally, Till the End of Time, Prisoner of Love, Because, When You Were Sweet Sixteen and Temptation – all in this album) and, although he is "just a singer," as he puts it, his television show has achieved a much higher rating than that of any other vocalist so far. Can any other barber equal that record?! – Duncan MacDonald, Jr.

Prisoner Of Love
Because
When You Were Sweet Sixteen
Far Away Places
Black Moonlight
While We're Young
Song Of Songs
Till The End Of Time
Temptation
If
If There Is Someone Lovelier Than You
Over The Rainbow
Posted by By Mark Betcher at 5:33 PM