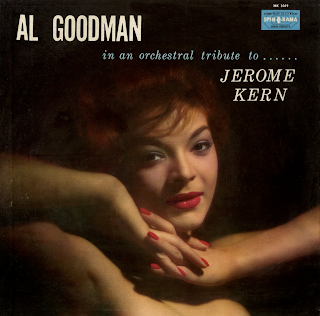 From the back cover: Jerome Kern was born in 1885 into a middle class family of German-Bohemian extraction. It was Kern's mother who supplied the love for good music which was ever present in the Kern household.

Jerome was the most musically talented of the three Kern boys. His mother, quick to recognize this, arranged for piano lessons. His piano teacher too, saw rare talent in young Jerome and the decision was made to launch his exceptional youngster into a professional musical career.\

The Kern family moved to Newark, N.J. in 1895. When Jerome entered high school he devoted most of his time and talents to music which he loved more than anything else. His next significant step was hi enrollment in the New York College of Music; then in 1903, he went to Europe where he remained for 2 years. It was while in Europe, after all his funds were expended, he turned to writing "for money". The rest is history. After his return to New York he was "discovered" by a Max Dreyfus who saw in Kern's music, a new, fresh, living style that made of Kern, the brightest musical star of the early 1920's.

Al Goodman famous conductor and musician has devoted all his life to music. Like Kern, Al Goodman's love for music and his inherent musical ability were manifest at an early age. As a youngster he sang soprano in his father's choir, became a musician in the pit of a local "movie house", and was awarded a scholarship to the Peabody Conservatory in Baltimore.

In 1951 Al Goodman was selected by Earl Carroll to accompany him to California as arranger and conductor. That was Goodman's official entry into show business... the start of an illustrious musical career which brought him into personal contact with the all-time "greats" as the conductor of many shows and musical productions whose successes were due in great measure to his outstanding ability.

The Night Was Made For Love
The Way You Look Tonight
The Song Is You
Long Ago And Far Away
The Last Time I Saw Paris
Look For The Silver Lining
Smoke Gets In Your Eyes
All The Things You Are
They Didn't Believe Me
I've Told Every Little Star
Posted by By Mark Betcher at 4:40 PM