Music For A Chinese Dinner At Home - Bob Lin Wu 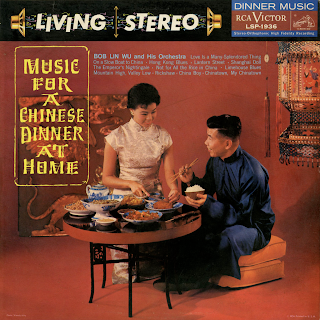 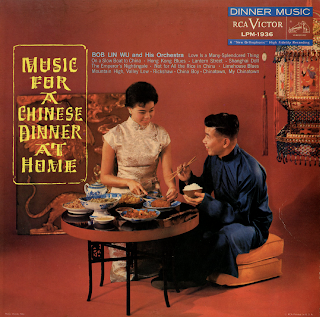 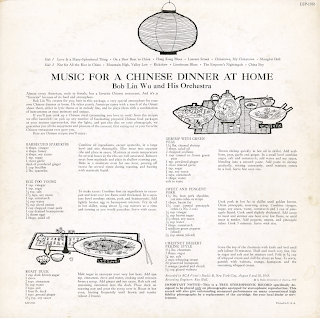 From Billboard - April 20, 1959: Victor Aid To Gourmet Digestion - RCA Victor has released five new disks in monaural and stereo versions to aid the home gourmet in the atmosphere department. A German, Chinese, French and Italian dinner, and an American barbecue are the themes around which various orks have woven background music. Arrangements of old favorites like "Blue Danube," "Chinatown, My Chinatown," "The Last Time I Saw Paris," and "Arrivederci, Roma," are played in a smooth style, that will please the ear as well as aid the digestion.

Each album has a gaily caparisoned couple of representative nationality hovering over a groaning board. The photography is mouthwatering. I place of liners, the back of each jacket has authentic, easy-to-follow recipes for a complete meal.

Love Is A Many-Splendored Thing
On A Slow Boat To China
Hong Kong Blues
Lantern Street
Chinatown, My Chinatown
Shanghai Doll
Not For All The Rice In China
Mountain High, Valley Low
Rickshaw
Limehouse Blues
The Emperor's Nightingale
China Boy
Posted by By Mark Betcher at 8:08 PM