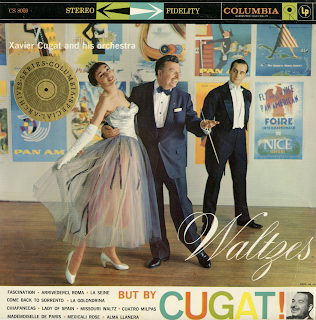 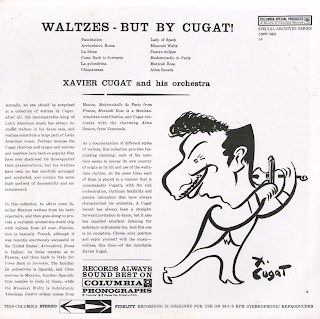 Available from online vendors, so I will not be posting a sample. Presented here to share the cover art and note excerpts.

From the back cover: In this collection, he (Cugat) offers some familiar Mexican waltzes from his basic repertoire, and then got along to provide a veritable around-the-world trip with waltzes from all over. Fascination is basically French, although it was recently enormously successful in the United States; Arrivederic Roma is Italian; La Seine returns us to France, and then back to Italy for Come Back To Sorrento. The familiar La Golondrina is Spanish, and Chiapanecas is Mexican. Another Spanish-type number is Lady Of Spain, while the Missouri Waltz is indubitably American. Cuatro Milpas comes from Mexico, Mademoiselle de Paris from France, Mexicali Rose is a Mexican-American contribution, and Cugat concluded with the charming Alma Ilanera, from Venezuela.

From Billboard - June 23, 1958 (CL 1143 review): This set could help Cugat capture the title of "Waltz King" in addition to his crown as king of Latin-American music. Of course, all of the waltzes are Latin-styled in spite of the three-quarter time. The ork plays them in delightful fashion, and dancers will enjoy the set. "Fascination," "Come Back To Sorrento" "Lady Of Spain" are some of the tunes played in waltz time, and some have English-Spanish vocals.