Ken Griffin At The Organ 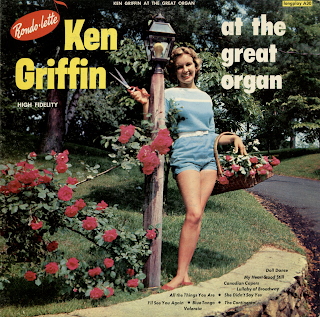 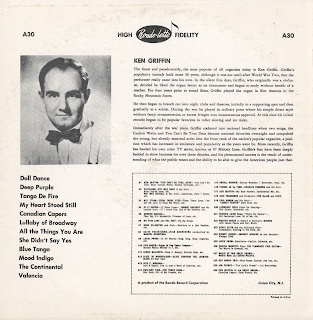 From the back cover: The finest and paradoxically, the most popular of all organists today is Ken Griffin. Griffin's popularity extends back some 30 years, although it was not until after World War Two, that the performer really came into his own. In the silent film days, Griffin, who originally was a violinist, decided he liked the organ better as an instrument and began to study without the benefit of a teacher. For four years prior to sound films, Griffin played the organ in film theaters in the Rocky Mountain States.

He then began to branch out into night clubs and theaters, initially in a supporting spot and then gradually as a soloist. During the war he played in military posts where his simple direct style without fancy ornamentation or excess fringes won instantaneous approval. At this time his initial records began to be popular favorites in roller skating and ice rinks.

Immediately after the war years, Griffin rocketed into national headlines when two songs, the Cuckoo Waltz and You Can't Be True Dear became national favorites overnight and catapulted the young, but already seasoned artist into the front rank of the nation's popular organists, a position which has increased in eminence and popularity as the years went by. More recently, Griffin has headed his own color TV series, known as 67 Melody Lane. Griffin's feet have been deeply bedded in show business for over three decades, and his phenomenal success is the result of understanding of what the public wants and the ability to give the American people just that.