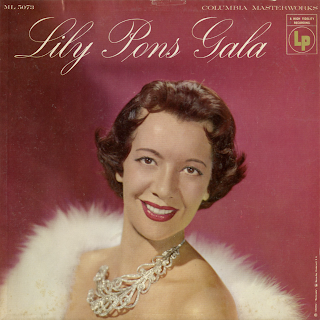 From the back cover: She was born in Cannes, the city of flowers, on the French Riviera. Her childhood was a period of happy wanderings in elementary piano music, which she began to pick out for herself from the age of five. At thirteen she enrolled in the Paris Conservatory and within two years had won a first prize. A piano career was confidently predicted for her.

During the first World War Lily Pons made her first public appearances, in Cannes. It is typical of her life that these were before the wounded veterans in the hospital at which her mother served as a volunteer nurse. These unfortunate, the first of many toward whose welfare Lily Pons has devoted large amounts of her time and energy, changed her career. They applauded the little piano pieces she played them – but they begged her for songs!

Little by little the songs became predominant and Miss Pons decided to train her voice. Within six weeks she had encompassed the teaching available in the voice at Cannes. She decided to try her luck as a singer in Paris, where she got an ingenue role in a new show almost at once. Then she sang an audition for the famous teacher Alberti di Gorositiaga, who immediately pronounced her voice phenomenal and made her a solemn promise – she would sing at the Met within five years.

After conquering a half dozen coloratura roles, she mad her debut in provincial opera houses in France. In the spring of 1930, after an exchange of letters between her teacher and the General Manager of the Metropolitan, she set sail for America. The crossing was stormy and, as she relates in her preface to the complete recording of Lucia, she lost four of her 109 pounds "in transit".

Nevertheless, after two days rest in her hotel room, she was ready for her audition, almost five years to the day from her first meeting with Gorositiaga. On the vast, empty stage of the Metropolitan that morning she experienced her first serious "butterflies" in one's tummy," a pre-performance condition she since has come to regard as standard equipment for Metropolitan appearances.

The audition she sang was a "killer," designed to demonstrate as forcibly as possible that she was not, as the Metropolitan's General Manager had feared on first sight, simply too small to be an opera singer. With that thought in mind that she had, after all, come 3000 miles for that moment, she decided to "shoot the coloratura works." I sang the Bell song from Lakme." she writes, "the Caro Nome, from Rigoletto, "Una voce poco fa' from The Barber, and – just for good measure... I ended up with the long Mad Scene."

Enough to exhaust the voice of many a vocalist for a week, the repertory had to be repeated that afternoon for the benefit of the president of the Metropolitan Opera Board. However, midway through, she was suddenly stopped and told: "We've heard enough." "Oh, mon Died," she thought; "I didn't concentrate. It's all over..."

But it wasn't. It was only the beginning. They had simply heard enough to know that she belonged among the stars. Her contract was signed that day.

The full story of her career since her debut could, obviously, be written entirely in box office statistics and the quotes of marveling critics. More importantly, it can also be written in terms of Lily Pons' service to others.

In June of 1938 Miss Pons received the first annual award of the National Bureau for Blind Artists for her work on behalf of the blind.

At the outbreak of World War II, she turned her back completely on footlight glamour and toured the globe singing to American G.I.s. Today millions of long-discharged soldiers and sailors still remember their petite friend from her plucky performances in the torrid sun of the Persian Gulf or the bitter cold of the Belgian front. She was the first woman performer to visit many a remote base, among them those in western China, which she could reach only by being flown over the perilous Assam "Hump" chained to a bucket seat in a B-29.

The countless decorations bestowed on her by dozens of countries, including the United States, of which she became a citizen in 1940, are a source of pride to Lily Pons. But they can be only a token of the esteem of a world to which she has brought so much pleasure and joy.