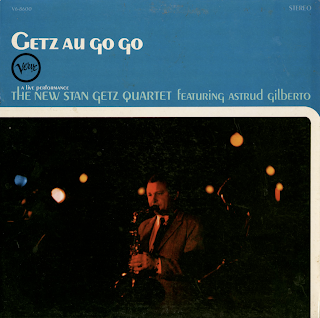 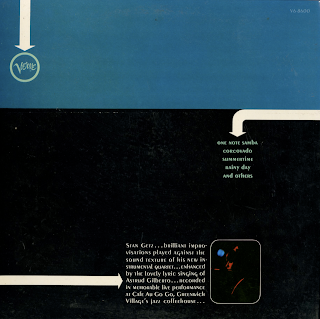 On Corcovado, It Might As Well Be Spring, Eu E Voce and The Telephone Song add Kenny Burrell, guitar and Helcio Milito replaces Hunt. On Summertime, One Note Samba, and Here's That Rainy Day, Chuck Israels plays bass.

Inside jacket photo: Stan Getz and Astrud Giberto are pictured during their historic Cafe Au Go Go engagement. Shown here sitting in on guitar with them is highly-talented Brazilian composer, Antonio Carlos Jobim

From the inside cover: The individual members of the New Stan Getz Quartet certainly deserve special credit for their work. The youngest member of the group is Gary Buron, 21. He is the product of the Boston Conservatory of Music and the Berklee School of Music and he also worked with George Shearing of a year. Stan took a liking to this talented kid the moment he auditioned. He encouraged him to develop his capabilities both as a vibraphonist and as a composer. His writing is represented in this album by The Singing Song and 6-Nix-Pix-Flix. Stan takes paternal pride in every achievement on this young virtuoso.

Drummer Joe Hunt, 26, began his professional career with the experimental George Russell group. Stan heard him at this time and inquired about him only to find out that a somewhat larger group had engaged his services for two-years – the United States Army. A day after his return to New York, however, Stan heard him again and hired him on the spot.

Bassist Gene Cherico, 29, began his career as a drummer. He learned bass as therapy for an injured right arm and became so accomplished at it that he never returned to drums. He has, however, an unusual understanding of that instrument which helps make this rhythm section so tight and fluid. Gene began and later worked with Maynard Ferguson, Red Norvo and George Shearing. He came on the band as a replacement but, as far as Stan's concerned, no one can replace Gene now.

Corcovado (Quiet Nights Of Quiet Stars)
It Might As Well Be Spring
Eu E Voce
Summertime
6-Nix-Pix-Flix
Only Trust Your Heart
The Singing Song
The Telephone Song
One Note Samba
Here's That Rainy Day
Posted by By Mark Betcher at 4:59 PM