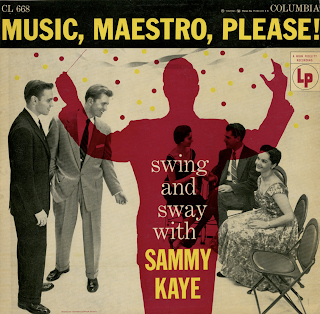 Available from online vendors so I will not be posting a sample. Presented here to share the graphically dynamic cover art and note excerpts.

From the back cover: Sammy Kaye was born in Cleveland, Ohio, and had a childhood comparable to that of any other American boy. For a time, athletics became his primary interest, and he was a member of the state relay championship team and became state low hurdle champion. Winning a scholarship at Ohio University, he continued his athletic career while studying civil engineering, and turned to music as a means of implementing his income. He organized an orchestra for college proms and hops that became so popular he opened his own dance hall. This establishment flourished under his direction, and he decided to stay with the music business.

Embarking on a tour, the orchestra met with instant acceptance, and the now-famous "Swing and Sway" style was evolved. Then, in 1938, the orchestra opened at Hotel Commodore in New York and consolidated the success it had on tour. From that time on, Sammy Kaye and his orchestra have played a ceaseless round of dance halls, theaters and hotels with undiminished success, enjoying the favor of dancers and listeners of all ages with their ability to play sweet ballads or brisk novelties.

Music, Maestro, Please!
Honey
Blue Prelude
Just A Gigolo
Dream For Sale
Y (That's Why)
You've Got Me Crying Again
As Time Goes By
No Greater Love
You Oughta Be In Pictures
Till I Kiss You At The Altar
Sittin' And Waitin'
Posted by By Mark Betcher at 3:46 AM