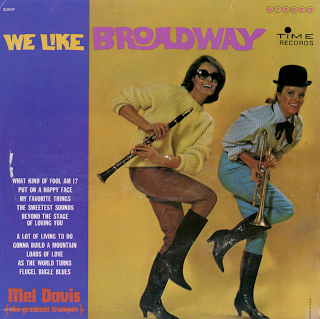 From the back cover: Mel Davis started out as a top club musician. Then his consulate artistry on trumpet created a demand by all the record companies to be on their recording sessions. He now is considered one of the top men in he field. Mel is a native Philadelphian. He was born in 1930 and was an exceptional student at the Curtis Institute, where he studied composition, theory and orchestration together with the trumpet. Mel also studied privately with Rosenfeld, who is the first trumpet player with the Philadelphia Orchestra. This accounts for his impeccable technique and full, rich tone.

After graduating from Curtis, Mel wen to Temple University for advance studies. While studying music, Mel was putting his training into practical use by playing numerous club dates in and around Philadelphia. During this time, he played a short stint with the St. Louis Symphonetta which, according to Mel, gave him a wealth of experience in meticulous ensemble playing. When Mel came to New York, his articulate talent was quickly recognized by all the top leaders and contractors.

What Kind Of Fool Am I
Put On A Happy Face
My Favorite Things
The Sweetest Sounds
Beyond The Stage Of Loving You
A Lot Of Living To Do
Gonna Build A Mountain
Loads Of Love
As The World Turns
Flugel Bugle Blues
Posted by By Mark Betcher at 4:42 AM