Music With A Heartbeat - D'artega 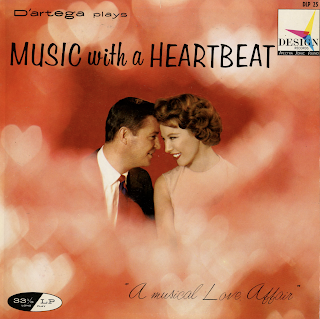 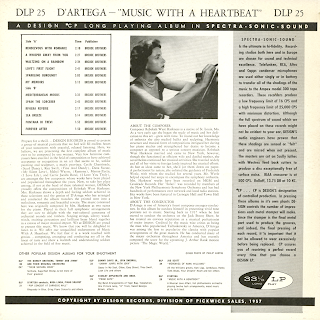 About the composer - Composer Rebekah West Harkness is a native of St. Louis, Mo. At a very early age she began the study of music and her dedication to this art – grew with time. TO round out her knowledge of esthetics she also studied ballet and sculpting. Harmonic structure and musical form of compositions intrigued her during her piano studies and strengthened her desire to become a composer as opposed to a serious concert musician. Rebekah West Harkness married and came to New York, however, though she functioned as an efficient wife and dutiful mother, she nevertheless continued her musical activities. She traveled widely and all of her visits to foreign lands inspired her musical efforts. As fast as ideas came to her, she'd jot them down on paper. A perfectionist by nature, she enlisted the guidance of Frederick Werle, with whom she studied for several years. Mr. Werle helped expand her scope to encompass the symphony orchestra. Mrs. Harkness works have been recorded on MGM and Cavalcade Records. Her "Safari" was recorded by members of the New York Philharmonic Symphony Orchestra and has had hundreds of performances over network and local radio stations. Her works have been featured in Carnegie Hall and Town Hall in New York.

About The Conductor - D'Artega is one of America's finest composer-arranger-conductors. In this album he outdoes himself in presenting vivid tone portraits set to music. Starting back in 1937 when he first started to conduct the orchestra on the Jack Benny Show, he has created an envious reputation as a musical perfectionist of major import. Credited by the music wise critics as being the man who popularized Tschaikowsky in America, D'Artega was among the first to popularize the classics with popular arrangements of the great masters. He has conducted many of the major orchestra throughout America and has recently composed the score for the upcoming J. Arthur Rank motion picture "The Magic World."

From Billboard - October 7, 1957: Altho the cover and title of this low-priced LP ($1.49) are obviously aimed at rack buyers, its content is classical, which may hamper it sales wise. D'Artega offers lushly orchestrated, symphonic arrangements of selections from two suites by Rebekah West Harkness. Excellent mood music for jocks with semi-classical programs, utilizing unhackneyed material.

Rendezvous With Romance
A Whisper Away From You
Waltzing On A Rainbow
Love's First Flight
Sparkling Burgundy
My Memoirs
Mediterranean Moods
Spain The Sorcerer
Riviera Reverie
Sea Breeze
Fontana Di Trevi
Forever After
Posted by By Mark Betcher at 4:16 AM