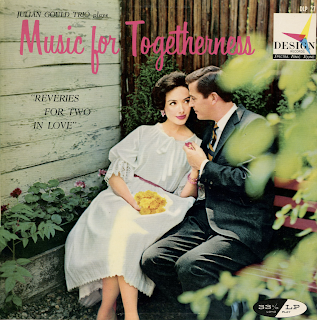 From the back cover: I first heard Julian Gould play in a service club in occupied Germany after the Second World War. I had walked in on an inspection trips as special service officer in the area. At the far end of the club there was a gathering of approximately fifty soldiers just standing around and listening to someone (I didn't know who at the time) play piano. I joined them and later induced Julian (the man at the piano) to play for boys in other areas thruout the command. When my tour of duty ended, I lost track of Julian Gould and it wasn't until last year when I was in Hollywood on a business trip that I heard those magic fingers of his, once again, tempt lovely sounds out of Mr. Steinway's best. We kept in touch and when I joined DESIGN in charge of Artists and Repertoire I convinced him to record for us. He has, and now you, too, can know why I was so anxious to have this outstanding American artist join our expanding circle of musical groups.

Tiara and Cliffs of Capri are both examples of Julian's composing skill. Even surround by the works of the very finest of composers, these two melodies are stand-outs. – Roy Freeman

From Billboard - October 7, 1957: The $1.49 price tag is the attractive feature here. Customers will probably be lured by the lower cost. The set is a pleasantly listenable grouping of schmaltzy romantic tunes. Gould's paying is in a sort of Cavaillaro vein.

These Foolish Things
Blue Moon
Intermezzo
Nocturne
Tiara
Deep Purple
As Time Goes By
Dancing In The Dark
Once In A While
Sunrise Serenade
Etude
Cliffs Of Capri
Posted by By Mark Betcher at 2:46 PM