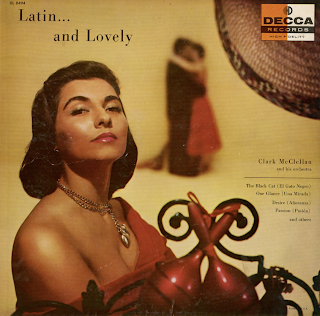 This set is available from online vendors so I will not be posting a sample. Shared here to present the original cover which is not available with the digital downloads.

Lush mood set that reminds me somewhat of Les Baxter's work form the same period. There are few online mentions of the talented McClellan who seems to have produced only this LP package and then disappeared.

From the back cover: The fact that McClellan is a composer, as well as an arranger and orchestra leader, assures the distinction of this album. Born in Grand Rapids, Michigan, Clark attended the Michigan State Teachers College, where he spent most of his time at the Conservatory Of Music. He had played the piano ever since he was six, had entered the Berger School of Music three years later, and had studied there for seven years; he had organized his first orchestra during high school days and had continued his musical activities at college, studying to become a teacher. He perfected himself in such technical matters as musicology, counterpoint, advanced harmony, and orchestration, until he entered the service of the Merchant Marines.

After a period of conducting and broadcasting, McClellan became musical coordinator and pianist on the Kay Kyser and Jack Haley TV shows. His progress as arranger, conductor and composer has progressed with simultaneous success.