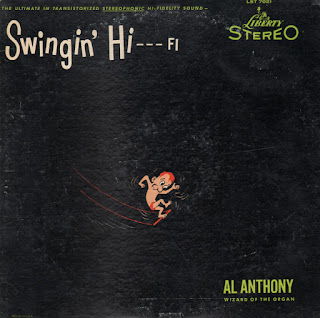 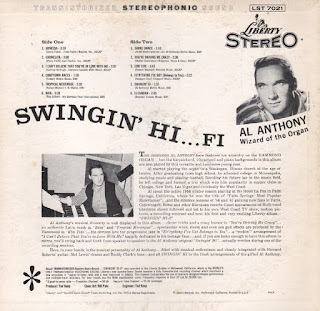 If Bill Pate is still around, perhaps he could leave a comment that explains the cartoon on the cover.

Ebb Tide is referred to, on the back cover as "a rockin' arrangement..."

From Billboard - December 22, 1958: Multi-track enables Anthony to provide tasteful, swingy organ solo work, plus his own backing (on harpsichord, vibraphone and piano) in this pleasant collection of instrumentals.

The backup musicians are engineered into the mix at such low levels that you hardly hear them working or think that their production could be organ effects.

From the back cover: Al started playing the organ in a Waukegan, Illinois church at the age of twelve. After graduating from high school, he attended college in Minneapolis, studying music and playing football. Deciding his future lay in the music field, he left college and formed a trio which won him popularity in supper clubs in Chicago, New York, Las Vega and eventually the West Coast.

Al spent the entire 1956 winter season playing at the Hotel La Paz in Palm Springs, California, where he won the title of "Palm Springs' Most Popular Entertainer"… and summer seasons of '56 and '57 gaining new fans in Paris, Copenhagen, Rome and other European resorts. Guest appearances on Hollywood television shows followed and led to his own West Coast TV show, motion pictures, a recording contract and now, his first and very exciting Liberty album.