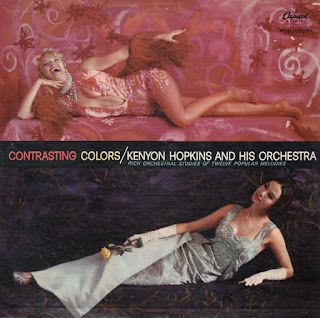 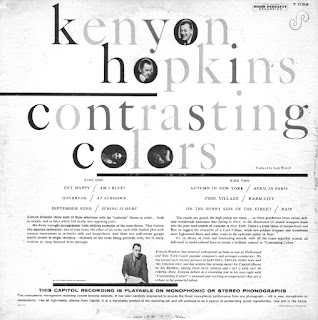 From the back cover: Keyon Hopkins has received widespread acclaim as one of Hollywood and New York's most popular composers and arranger-conductors. He has scored such motion-pictures as Baby Doll, Twelve Angry Men and The Strange One, and has written fine arrangements for Capitol albums by Joe Bushkin, among them Blue Angels and I Get A Kick Out Of Porter. Here, Kenyon debuts as a recording star in his own right with "Contrasting Colors" – unusual and exciting arrangements that are a tribute to his powerful talent.

Hopkins created an amazing big band concept debut album. The jacket notes hit the mark whereas Billboard spends too much word count on the cover images. It seems as though the reviewer failed to read the jacket notes that explain that "They (the arrangements) feature two separate orchestras: one of nine brass, the other of six reeds, each with rhythm plus such unusual instruments as orchestra bells and harpsichord. And these two well-woven groups match sounds in bright interplay – choruses by the reeds fitting perfectly with, but in sharp contrast to, deep-throated brass passages."

So, if I read the notes correctly, the "contrasts" are more than "mood" shifts between songs.

Get Happy
Am I Blue
Daybreak
At Sundown
September Song
Spring Is Here
Autumn In New York
April In Paris
Posted by By Mark Betcher at 2:40 PM