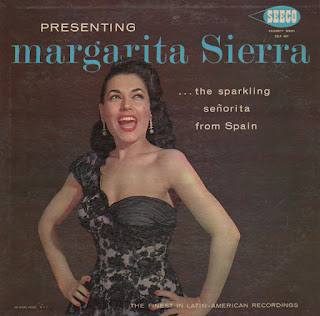 Sierra appeared in an early 60s American television series, Surfside 6 as nightclub singer Cha Cha O'Brien. She died in Hollywood, California in 1963 at the age of 27 from complications following heart surgery.

There is a 1961 listing in Billboard for another album she made: Margarita (Cha Cha) Sierra (Warner Bros. 4248).

From the back cover: The current rage in American nightclubs is foreign chanteuses, and one columnist was heard to remark that there were more of them here than in Europe. Perhaps the most exciting young lady of them all is a singing flamenco beauty from Seville, Margarita Sierra.

Born in Madrid, Spain, this dark-haired, flashing-eyed beauty was a sensation on the continent and in Havana, Mexico City, and Caracas before making her American debut at the Nautilus Hotel in Miami Beach. It was while she was appearing at the Nacional Hotel in Havana that she was tapped for her Florida engagement, which proved as equally successful.

Miss Sierra was immediately brought to New York by Angel Lopez to star in his Latin-Amercian cabaret in the East. This was followed by engagements at the Viennese Lantern and the Maisonette Room of the St. Regis Hotel.

Miss Sierra speaks little English and sings but little more, but she nevertheless generates a sizzling rapport with her audience. She has an exceptionally well-developed voice and a repertoire stacked with the familiars that rate her the windfall applause, including "Malaeguena", "Lisbon Antigua", a Mexican medley and "Noche de Ronde". Her rendition of "Who'll But My Violets" is reported to be the best since Lupe Velez introduced it many years ago at the Rialto in New York City.

Wherever this sultry Miss has appeared in top-ranking supper clubs and hotels throughout the world, the wall have echoed with thunderous "Bravos" for her fine performances. At each engagement she captures the audience in the same "tender trap". She sings with a surefire charm that weaves a spell over breathless swains at ringside. With her fine contralto voice and stylized treatment, the Spanish lyrics take on lucid meaning.

One of the most striking assets in Miss Sierra's favor is her gorgeous wardrobe, which consists of fabulous gowns – all originals – designed by Spain's leading couturiers; Raffran of Barcelona, Vianor of Barcelona, and Marbel of Madrid. While appearing in Miami she was requested to display them at a special fashion show at one of the Florida resort's more exclusive shops.