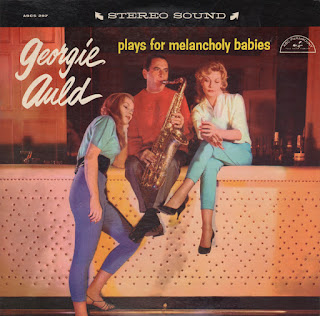 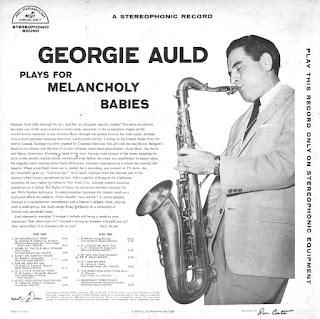 From Billboard - September 7, 1959: Backed mainly by a swingy organ, Auld provides his usual sock sax solo work on a group of standards ranging in mood from the bouncy "The Dark Town Strutters Ball" to the tender "If I Had My Way." Fine Jockey Wax.

From the back cover: Georgie Auld talks through his sax: and he's an eloquent speaker, indeed! The tenor saxophone becomes one of the most expressive instruments anywhere in the sympathetic fingers of the world-famous musician. Every emotion flows through the golden horn at the Auld touch, perhaps with a more personal meaning than even words could convey. Coming to the United States from his native Canada, Georgie was first inspired by Coleman Hawkins. His job with the late Bunny Berigan's band in the thirties was the first of a chain of great name band associations – Artie Shaw, Jan Savitt and Benny Goodman. Fronting a band of his own, Georgie kept abreast of the times, adapting his style to the newest musical trends, sometimes even before the trend was established. In recent years, his singular talent soaring about band affiliations, Georgie's reputation as a soloist has reached the heights. When a top-flight tenor sax is needed for a recording, jazz concert or TV show, the cry invariably goes up, "Call Georgie!"


My Melancholy Baby
Down By The Old Mill Stream
Shine On Harvest Moon
For Me And My Gal
In A Little Spanish Town
Music Goes Round And Round
Always
If I Could Be With You
My Gal Sal
If I Had My Way
The Darktown Strutters Ball
Goodnight Sweetheart
Posted by By Mark Betcher at 5:44 AM