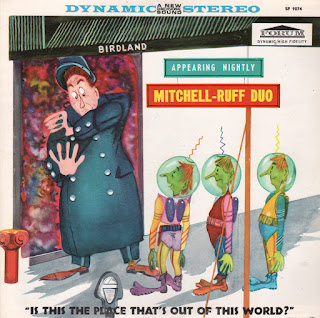 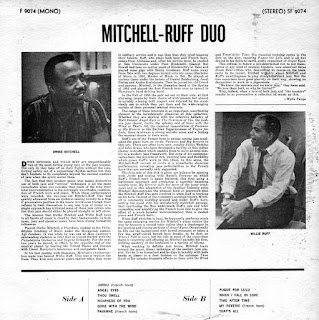 Available from at least one online vendor as "Mitchell-Ruff Duo" but featured without the cover art/information. I'm not sure why Forum decided to market the album by featuring the "cartoon" on the cover. The set is adult, subtle, smooth and inventive and seems as though it would have benefited from a more sophisticated illustrative jacket design. Cover art aside, this is an excellent late 50s jazz set all the way through.

From the back cover: Pianist Dwike Mitchell, a Floridian, studied at the Philadelphia Academy of Music under the Hungarian pianist, Agi Jamboor. It was while he was one of Miss Jamboor's outstanding students in 1953 that he played Bartok with the Philadelphia Orchestra and Eugene Ormandy. For the next two years he moved, in effect, to the opposite end of the musical planet by touring the United States and Europe with Lionel Hampton's boisterous and peripatetic band.

In the last months with Hampton, Mitchell's rhythm-section mate was bassist Willie Ruff. This was a reunion for them. They first met, several years earlier when they were in military service and it was then that they tried teaming their talents. Ruff, who plays both bass and French Horn, comes from Alabama and, after his service term, he studied at Yale University under Paul Hinemith, (pianist Mell Powell had been an earlier pupil of Hindemith's at Yale) and played some gigs with Benny Goodman. Ruff came away from Yale with two degrees tacked onto his name (Bachelor of Music in 1953, Master of Music in '54). He played at various times under the baton of Daniel Saidenburg, Jonel Perlea and Andre Kostelanetz. Then he joined his old friend and partner, Mitchell, in the Hampton band in the Spring of 1955 and played the first French horn ever to sprout in Hampton's hard driving band.

In the Fall of 1955, the pair set out on their own, at first alarming people by their choice of instruments but almost invariably winning both respect and interest by the musicianly use to which they put them and the wide-ranging variety of their personal musical interests.
Jordu
Angel Eyes
Thou Swell
Nearness Of You
Gone With The Wind
Pavanne
Fugue For Lulu
When I Fall In Love
Time After Time
My Reverie
That's All
Posted by By Mark Betcher at 6:16 AM