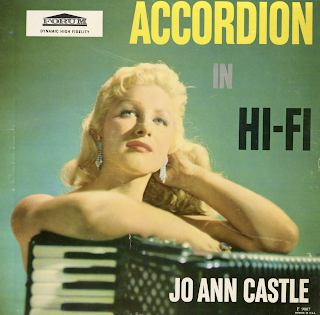 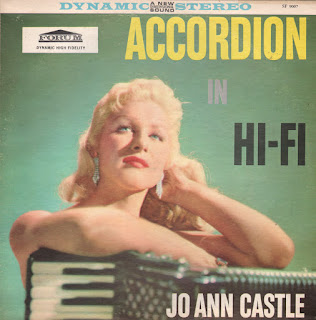 From the back cover: Her musical talent has won her appearances on television with Ina Ray Hutton, Spike Jones and Arthur Godfrey. On the night club circuit, she has starred in such important showplaces as Ciro's and the Plymouth House in Los Angeles and at the Fremont Hotel in Las Vagas where she was backed by her own rhythm group of guitar, bass and drums. In addition to that, she composes many of her own tunes and arranges everything she plays. All this musical versatility, for those who are interested in this kind of information, is wrapped up in a tall, beautiful, blue-eyed blonde. What more could anyone ask.

Tico Tico
Harbor Lights
Sway
The World Is Waiting For The Sunrise
September SOng
Cherokee
Bumble Boogie
Diane
The Breeze And I
After You've Gone
Charmaine
Cumana
Posted by By Mark Betcher at 7:06 AM